– RANIAN ROMEO & JULIET VERSUS MARYAM RAJAVI THE WITCH
Sanaz Bazazian and Bijan Khademi are the Iranian Romeo and Juliet in Tirana. The couple were previously members of the defunct terrorist organization Mujahedin Khalq, MEK, locked up in Camp Ashraf 3 in Manez, Durres, Albania. They fell in love with each other thus violating one of the basic rules of the Rajavi cult (MEK): Love is “HARAM”! Love is forbidden because it prevents cult members from overthrowing the government of Iran…

– Good News From Albania – Family Visits May Go Ahead 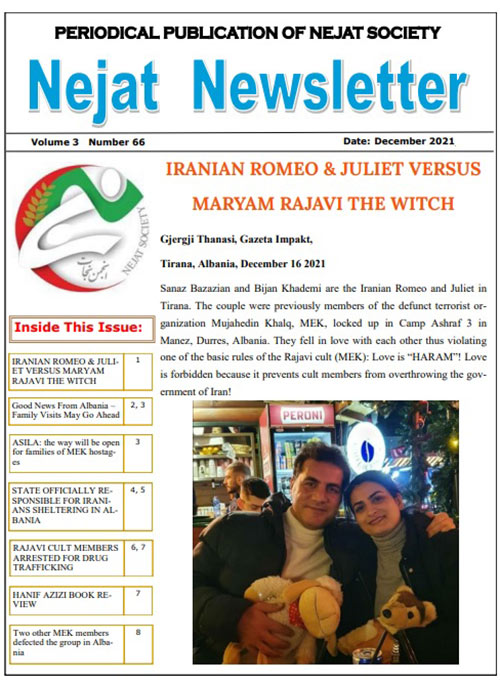 In a summit held on December 20-21, hosted by Albanian Prime Minister Edi Rama in the Albanian capital Tirana with his counterpart from North Macedonia, Zoran Zaev, and Serbian President Aleksandar Vucic, a raft of deals was signed that …

– ASILA: the way will be open for families of MEK hostages
The head of the Association for the Support of the Iranians Living in Albania (ASILA) spoke of the new options that are opening for the families of MEK members who are looking forward to visiting their loved ones in the group’s camp in Albania. The newly established ASILA has the duty to support the Iranians who defects the Cult of Rajavi and the families of those who are still taken as hostages in the group’s camp Ashraf 3, in the region of Durres in North of Tirana, Albania.

– STATE OFFICIALLY RESPONSIBLE FOR IRANIANS SHELTERING IN ALBANIA
Between 2013 (in the last days of the Berisha Government 2) and 2016, several thousand Iranians arrived in Albania on the basis of an agreement never made public between the Albanian governments and the international community.

– HANIF AZIZI BOOK REVIEW
Hanif Azizi grew up on a military base in the Iraqi desert. His parents are warriors for the Iranian rebel movement Mujahedin of the People and the fight against Khomeini permeates his entire life.
After his father is killed in the war, nine-year-old Hanif takes his little brother by the hand and begins an escape that eventually takes him to Sweden. He has a hard time adjusting to the new country and in his teens he gets in touch with the terrorist-branded rebel movement again. Attracted by fellowship and a possible reunion with his mother, he goes to Iraq to become a warrior in the People’s Mujahedin

– RAJAVI CULT MEMBERS ARRESTED FOR DRUG TRAFFICKING
Members of MEK, the exiled Iranian opposition group that has been granted refuge in Albania since 2013, have been arrested for drug trafficking, people smuggling, and money laundering, according to an
official document seen by Exit. The document, addressed to a foreign diplomatic recipient, bearing the signature and stamp of the Director of the Criminal Police Department in the State Police, gives details
of a serious rap sheet of offences, reportedly involving MEK members. It states that two members of
MEK, along with Albanian and Greek accomplices, were ap prehended for direct involvement in human trafficking

– Two other MEK members defected the group in Albania
Hassan Heirani announced the separation of Mehdi Mazloumi and Ali Asghar Kalateh Seifari from the Mujahedin-e Khalq in Albania. In a video link with some of Nejat society families of Zanjan, the head of ASILA, Hassan Heyrani, reported these two members’ defection from the group. The online meeting held on Saturday, Dec.25.

The story of Torabi family; torn apart by the MEK

Nejat Society and families; main contradictions to the MEK