– The Iranian New Year
If you ask an Iranian why they are so happy during the last days of winter and the first days of spring, they will smile at you and say, we celebrate balance: balance of light and dark. We
think that’s the start of something new. 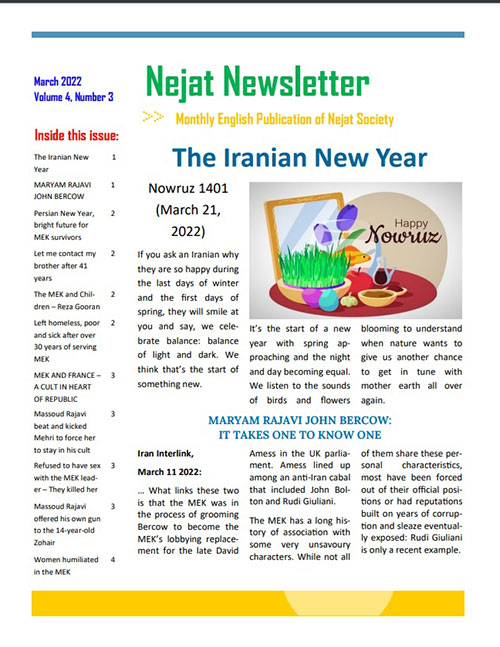 … What links these two is that the MEK was in the process of grooming Bercow to become the
MEK’s lobbying replacement for the late David Amess in the UK parliament. Amess lined up
among an anti-Iran cabal that included John Bolton and Rudi Giuliani.

– Persian New Year, bright future for MEK survivors
As all Iranians around the world celebrate Nowruz, the Persian New Year, there are a few thousands of Iranians taken as hostages by the Mujahedin Khalq Organization (the MKO/ MEK/PMOI/ Cult of Rajavi) in Albania. However, recent developments regarding the MEK hostages indicate a potential positive perspective.

– Let me contact my brother after 41 years
Khoram Ramazani was taken as a war prisoner in September 1980, in the early days of the Iran-Iraq war. He was in contact with his family through letters and photos that he used to send via the international

– The MEK and Children – Reza Gooran
In September 2002, Reza was five years old when his mother Farokh Farhangian took him across the Kurdistan border to join the Mujahedin Khalq (MKO/ MEK/PMOI/ Cult of Rajavi) At the time, there was almost no child in the group’s Camp Ashraf

– Left homeless, poor and sick after over 30 years of serving MEK
Barani Dehghani, former member of the Mujahedin Khalq Organization… He was taken as a hostage by MEK forces in the front, in March 1987. As he was not registered as a war prisoner, he was intimidated to stay in the Cult of Rajavi in Iraq.

– MEK AND FRANCE – A CULT IN HEART OF REPUBLIC
… Iran has unveiled the Persian copy of a French book that reviews the grisly crimes committed by the notorious antiIran terror group, Mujahedin-e Khalq Organization.
A Cult in the Heart of the Republic is the title of the book written by a member of the French
Senate, Nathalie Goulet….

– Massoud Rajavi beat and kicked Mehri to force her to stay in his cult
Mehri Musavi a female member of the MEK was killed in 2003 after she asked to leave the
group. Born in 1961 Mehri Musavi was a student in her twenties studying in a university in the United States when she decided to join the MEK in Iraq.

– Refused to have sex with the MEK leader – They killed her
Minoo Fathali was killed by the MEK leaders because she did not want to sleep with the leader of the Mujahedin Khalq (MEK/ MKO/ PMOI/Cult of Rajavi), Massoud Rajavi.

– Massoud Rajavi offered his own gun to the 14-year-old Zohair
Zohair Zakeri was born in 1976. When in 1991 Massoud Rajavi ordered to separate the children form their Mujahed parents and smuggle them to Europe and North America, Zohair
refused to leave Camp Ashraf; he allegedly wanted to be a fighter of the MEK’s army, the
so-called National Liberation army…

– Women humiliated in the MEK
. . . Every year on the anniversary of the “International Women’s day, the MEK gathers a number of women unaware of the group’s history of terrorist activities; agenda: necessity of freedom for women in the Iranian society!!