‘ font-size: 10pt”>Discussion of the Mojahedin-e Khalq/National Council of Resistance and its activities in the EU Parliament 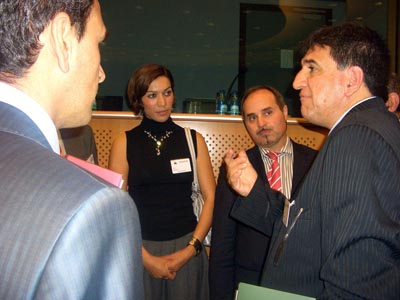 ‘ font-size: 10pt”>On Tuesday 9 September a meeting was held by the Delegation for Relations with Iran in the European Parliament. The meeting focused on ‘Discussion of the Mojahedin-e Khalq/National Council of Resistance and its activities in an exchange of views with:

‘ font-size: 10pt”>Ms Angelika Beer, President of the Iran Delegation (Greens/EFA), began by describing the MKO and its activities up to the present time.

‘ font-size: 10pt”>Anne Singleton briefly described her own involvement with the MKO for over twenty years.

‘ font-size: 10pt”>Asserting that the MKO will not give up the use of violence to achieve its aims, Ms Singleton went on to explain why, in spite of that, she believes that the MKO has currently little to do with the Iranian political scene, but that precisely because it is a cult, its danger is that it interferes in parliamentary democracy in western countries in ways that may even involve criminal activity.

‘ font-size: 10pt”>Whilst agreeing that the MKO’s platform of ‘total regime change’ in Iran could be attractive to some politicians in the west, Ms Singleton challenged the delegates to consider whether the MKO would be able to achieve its stated aim – ‘will it do what it says on the tin’? Since its last major offensive against Iran in 1988, the MKO has achieved little to further its aims. She told delegates that they should also consider the possibility that, even if they believe the MKO has changed tactic and intends to pursue its aims only through political opposition, the MKO may not actually be ‘fit for purpose’ She urged them to consider the evidence of the three former residents of Camp Ashraf who have arrived in Europe from Iraq only in the past few weeks, and who would speak later in the meeting about conditions inside the MKO.

‘ font-size: 10pt”>Ms Singleton asserted that Iranian people – as those delegates who have visited Iran are aware – are not waiting to be rescued by the MKO and are capable of opposing their own government. Iranian women are not waiting to be taught about feminism by Maryam Rajavi who leads an organisation which – as Batul Ebrahimi will testify – badly abuses women members.

‘ font-size: 10pt”>Then Ms Singleton described the current situation of the MKO in Iraq. Control of Camp Ashraf, the MKO’s headquarters, has been transferred from the American military to the Iraqi military. Ms Singleton said that Iraqi government officials are angry at reports which suggest that the MKO would be ‘massacred’ if the Americans handed over Camp Ashraf.

‘ font-size: 10pt”>Instead, the people inside the camp are facing a humanitarian crisis because they are not allowed even basic freedoms such as the right to enjoy contact and visits from their families. A rumour has arisen that the Americans have removed around 300 of those captive in Camp Ashraf and left the others. Ms Singleton said that if this is the case then she would consider the remaining 3000 individuals in Camp Ashraf to be ex-members of the MKO. They should be brought to western countries as soon as possible.

‘ font-size: 10pt”>Finally, Ms Singleton presented delegates with one solution to the crisis at Camp Ashraf, remove the MKO from the European terrorist list and bring ALL 3,300 residents to Europe where those who are mentally, physically and emotionally sick would be able to receive help.

‘ font-size: 10pt”>Ms Singleton finished by reminding delegates that continuing support for the MKO would, of course, mean that the European Parliament accepted to have a cult operating in its midst and continuing to interfere in parliamentary democracy. However, if that is the decision to be made, then so be it.

‘ font-size: 10pt”>Ms Ebrahimi (speaking in Farsi) told delegates that she had gone to Camp Ashraf when she was sixteen years old and although she quickly realised she wanted to leave, she was captive there for another ten years. She described conditions for women in the camp. Not only does the MKO not allow women to marry, women are made to work in the scorching sun for hours at a time so their complexions are ruined and they become ugly. This is so they do not develop the vanity to think they could be attractive to a man, she told delegates.

‘ font-size: 10pt”>In order to remove hope from the women of ever having a family, they are being sent under surgery for spurious medical conditions to have their wombs removed [hysterectomy] and around ten percent of women in Camp Ashraf have now undergone this surgery. When they tried to impose it on her, Ms Ebrahimi ran away. She begged delegates to take doctors to Camp Ashraf to check the veracity of what she was telling them.

‘ font-size: 10pt”>The MKO told her that if she left the camp and went with the American soldiers, they would rape her. For this reason it took two years before she was able to have the courage to escape.

‘ font-size: 10pt”>Ms Ebrahimi said she saw Mr Paulo Casaca when he visited Camp Ashraf. We were not allowed to approach him and speak to him, she explained to delegates. If they had somewhere to go, she told delegates, without doubt ninety-nine percent of the people in Camp Ashraf would leave the camp and the MKO.

‘ font-size: 10pt”>Mr Hamid Siah Mansoori (speaking English) told delegates he had been in the MKO for over twenty five years. He described how he had gone to Iraq from Canada. He had a good education, and a good life in Canada and had his own business before leaving everything behind in the mid 1980s to go to Iraq. He then described the MKO’s attitude to family. He said no one is allowed to contact their family, except in a few cases where people were told to contact their family to get money from them. He said the MKO told his family he was dead. They came to look for him five years ago – at the beginning of the American occupation – but were told he was dead.

‘ font-size: 10pt”>Mr Hamid Siah Mansoori said he had arrived only a week ago, but had lost any contact details for his family. Nevertheless, his first priority now was to make contact with his parents and the rest of his family.

‘ font-size: 10pt”>Ms Beer asked delegates if they had questions. One delegate asked how the MKO continued to be financed which allowed them to continue to undertake such expensive campaigns in parliament and elsewhere. Another delegate asked for more detail about the role of the Americans in supporting Camp Ashraf when the US State Department so strongly describes them as a terrorist group.

‘ font-size: 10pt”>Anne Singleton answered these questions, pointing out that during the reign of Saddam Hussein the MKO had received almost unlimited finance from Saddam Hussein, as well as from Saudi Arabia and some western governments from behind the scene. Now, however, although it is clear that MKO finances are dwindling somewhat, it was unclear how the MKO could continue to spend so much money, and the only people to answer that are the MKO themselves.

‘ font-size: 10pt”>Ms Singleton pointed out a five year rift in policy toward the MKO between the US State Department – which has a very thorough knowledge of the MKO – and the US Defense Department under Donald Rumsfeld. Some in the US Administration wanted to use the MKO in confronting Iran and therefore Camp Ashraf has been protected by the US military in Iraq for five years. Ms Singleton conceded that this protection was beneficial in keeping the MKO out of danger in the midst of a war zone. But that the Americans had also flouted the UN Fourth Geneva protocol by not allowing MKO to meet their families and not enabling them to leave the situation.

‘ font-size: 10pt”>Ms Beer then introduced Mr Mohammad Sobhani who had previously addressed the Delegation. Following that meeting he had been the subject of unfounded accusations of having attacked MKO members in Paris. Instead, Mr Sobhani was the victim of a violent attack when some fifty MKO supporters ambushed a meeting at which Mr Sobhani was a speaker.

‘ font-size: 10pt”>Following this, Mr Hadi Shams Haeri briefly pleaded with delegates to help him have contact with his children whom he has not been allowed to see for eighteen years. He asked that Mr Paulo Casaca accompany him to Camp Ashraf and help him meet with them again.

‘ font-size: 10pt”>At the end of the meeting Ms Beer expressed her appreciation for the speakers and said it had been a valuable meeting. One which, given the ongoing situation at Camp Ashraf, might soon be repeated.

‘ font-size: 10pt”>After the meeting, several of the attendees stopped to talk to the visitors – in particular the three who had just arrived from Iraq – and asked them to keep them informed of developments. 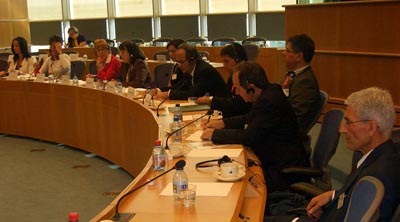 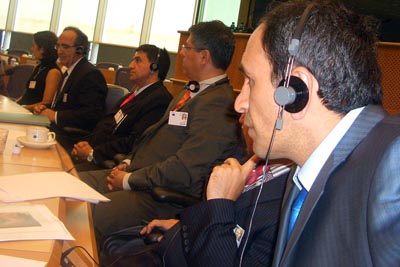 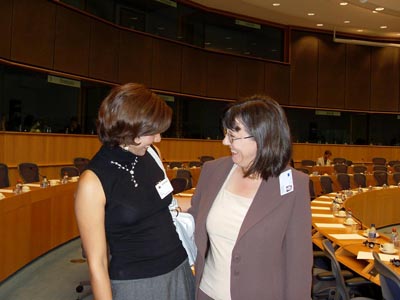