Now that the US administration has handed over the protection of Camp Ashraf where the MKO militants are based, to Iraqi government, Mujahedin’s protestation continues seriously asking for the continuance of the Camp’s 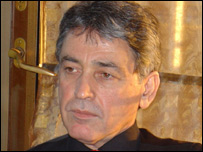 activities. They used all their forces lobbying in the Europe and America to guarantee the right to remain active in Iraq “under the international supervision”. They have always spoken of “Ashraf City “as their largest remaining hope to make a democratic change in Iran.

A large number of evidences show that the hand over of Camp Ashraf to Iraqi government is a part of an inevitable approach which would happen later or sooner. But MEK has a different vision on Iraqi matters and US-Iran relations. MKO’s insistence and attempts to maintain Camp Ashraf and continue their organized presence in Iraq are based on the following accounts:

They think that the security issue in Iraq will not be improved.

In MKO’s opinion the regime of Iran is absolutely opposing the improvement of security in Iraq and its involvement in Iraqi affairs will surely continue.

They suppose that Iran will absolutely continue its nuclear program to achieve the nuclear weapon, so the probability of the American military invasion to Iran is a lot.

According to the two above-mentioned reasons, they guess that the US-Iran relations will worsen and the efforts to “change the regime’s behavior” will end up to “regime change”

They imagine that there is no force to aid the US and its allies to advance the above-mentioned option except Mujahedin. They foresee that the main reliable case, for American government and its allies, to achieve the strategic regime change, is to rely on the forces based in Camp Ashraf.

Although the influential elements including neo-conservatives, in the US, Israel and some other countries still see and want their desirable option as what Mujahedin-e-Khalq say, Mujahedin’s vision and demand is totally out of reality and full of their tendency to self-appeasement . The followings are the reasons to such a judgment:

Due to the extraordinary heavy internal pressure on the US administration, the direction of the events is along with the decline of American engagements and military interventions in Iraq and the rise of handing the affairs to Iraqi government further; in order to end the civil war and getting the American and British army out of battle scenes.

Since the Iraqi communities such as Kurdish, Shiites and Sunnites are evidently willing to end with the role of the alliance forces in Iraq, their progress is completely expectable.

Regarding that the Sunnite parties, the remains of Baath and Al-Qaida supporters will never find the power in Iraq, the national sovereignty and the actual power will remain in the hands of Kurds and Shiites who control a large part of Iraqi territory.

Considering the results of the last year’s congress election and the changing approach of the equation of the forces in the US government system and regarding the usual approach of the State Department and the obvious differences between Robert Gaith and Donald Rumsfeld, and also regarding the view of the future presidential election of the US; according to the evolutions in US-Iran relations during the past year, the most likely tendency in American policy towards Iran is along with  flexibility ,cooperation and active diplomacy instead of military confrontation.

Considering the fact that the fall of Saddam Hussein ended with the increasing role of Iran in Iraq. Among all the countries in the region-even according to MKO’s clear confession-Iran has the closest relations with Iraqi government. To weaken or change the Iraqi government is a serious loss for Islamic Republic of Iran.

Mujahedin’s forecasts and analysis, on the way the events happen in the region, are not compatible with the reality. The probability of succeeding in their approach to make the American administration accept their visions and evaluations is less than zero. Therefore the views and efforts of various political forces on MKO’s situation will be one of the followings:

As a part of agreeable cases among Iran, America and Iraq, MKO will be under pressure until they are partly or totally handed to Iranian government (The Islamic Republic is trying to achieve the solution).

MKO will stay in Camp Ashraf –under international supervision and continue its actual activities. (this solution is sought by MKO, neo-cons of the US, Israel and any one who is seeking the military option towards Iran)

Camp Ashraf residents will have the chance to get refugee in safe countries, by the help of international human rights communities. (This solution is totally supported by all freedom seekers in Iran, human rights organizations ,the progressive elements in Iraq and the majority of the nations all over the world.)

There is no forth solution for MKO. As the time passes and MEK are in Iraq, just the risk of being compulsorily handed over to Iran or being terrorized or captured by the hostile forces in Iraq, will heighten.

Mujahedin-e-Khalq should accept that the continuance of their organized presence in Iraq causes more insecurity and civil war in Iraq and increases the confusions in US-Iran relations. They accept the truth: the direction of the events is going to make the presence of MKO impossible, in Iraq.

Mujahedin haven’t shown any interest to pursue the third solution yet. Their official request is to remain in Iraq but not to leave it. They are still gathering the international support to stay in Iraq. Some dissident organizations agreed the MEK’s request for staying in Iraq and warned about the risk of giving them to Iran. The Mujahedin khalq Organization is the most isolated force among the Iranian political forces. It is designated as a terrorist organization by the US and the European Union. MEK’s behavior toward its political dissidents is bloody. It’s internal structure is dangerously similar to that of “Godess and Slaves”. The main characteristic of MKO is achieving the political power by any mean and with any price, even via war and military invasion to another country. Thus cooperation, negotiation, agreement and accompaniment with MKO are never practical. Any word of their speech to their opponents smells the blood and hatred.

Although the MEK has no common point with the other political forces of the country, the indifference regarding the fate of Ashraf residents will end with a disaster. The price of MKO’s stay in Iraq is to risk the fate of 3500 human beings who have the right to live a normal life. The MKO’s decision based on staying in Iraq should be complained.