In Iran’s contemporary history, Mojahedin Khalq Organization (MKO,MEK, PMOI, NCRI, NLA) is the exact illustration of a political movement that strongly advocated a strategy of armed struggle that has proved defeated and unproductive. A review of its function in the course of all these years well depicts the clear and basic controversy between its organizational instructions and that Iran’s social-political conditions. They were moving on a wrong path from the very beginning but kept pretending an avant-garde of a struggle manner that people disapproved. It is always people, however, who have paid the heavy price of the factions’ deviation and dogmatism in the accomplishment of their ambitions.

Nearly four decades ago, Mohammad Hanif-Nezhad along with a number of other students, formerly active in National Front, came together to establish an organization that has so far moved in a struggle path totally different from other previously established armed movements like Sazman-e Cherikhai-e Fedaye Khalq (People’s Devoted Militia Organization). Approved by the leaders of many pro-Marxist militias, none of the armed struggle moves in the process of Iran’s political and social fluctuations has proved to be productive and MKO has been no exception. Compared with its parallel armed groups, MKO seem to have suffered a more pitiful and deplorable destiny after selling itself to liberalism and imperialism.

The group’s past history is intermingled with a variety of different and controversial phases. It received two devastating internal and external blows, namely, the ideological split and mass arrests by monarchical regime’s notorious SAVAK. In both circumstances, the organization nearly lost 90 percent of its insiders, but a passing look over its activities, from its inception to the Islamic revolution, evidentially indicate that it had had no influential impact on social milieu and ambiance.

In contrast to the group’s baseless analyses claiming to have played a crucial role in Iran’s contemporary political history, in many cases it acted as a deterrent trying to misconduct the justly guided march of people to achieve their right wants. The armed move that MKO announced against the will of nation to overthrow the Islamic Republic proved to be a total failure; the outcome was a bloodbath targeting many innocent civilians and officials. 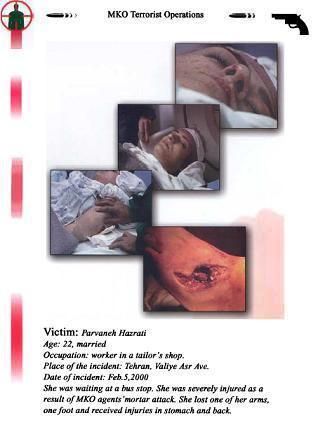 The MKO’s first attempt to create a military spectacle the same as Fedayan’s daring operation of Siahkal failed, that is to say, its plan to disrupt the 1971 celebrations surrounding the 2500th anniversary of the Persian monarchy. In fact, although it was an attempt to win the control and leadership of the armed struggle, but the armed strategy in itself was in no way justifiable. The historical necessity of the armed struggle at the time was still a big question; yet, the important point was the influence of the rising tide of the guerilla struggles.

Mojahedin were imitators of Fedayan militia who also imitated the guerilla and armed activities of other countries like Algeria, Cuba, and Vietnam. The strategy heavily influenced by the struggling experiences of the guerillas in those countries was in absolute contradiction to Iranian social, cultural, and religious context.

Moreover, Fedayan were under the heavy influence of Marxism and were running on a path to corroborate the theoretical and philosophical aspects of Marxism while Mojahedin believed they were holding an ideological supremacy over other leftist rivals. Mojahedin were basically formed according to the left parties’ structure. Ideologically, the organization was under the heavy influence of the National Front’s scientific theory. Thus, Mojahedin and other active rivals advocating armed strategy against Shah, actually distanced from the main objectives of the armed struggle aimed to prepare a background for the masses to rise and join the struggle. The armed struggle, under the pretext of fighting against Shah’s tyranny, turned into a battle of the ideologies. Well aware of the fact that they were all walking in a wrong path, none of the sides dared to make a rational critique of the strategy; the discouraging factor was being labeled as compromisers. That is to say, if anyone made an appeal to justify that the objective conditions were inappropriate for revolution, he would be labeled a compromiser, reformist, opportunist, and lacking the needed political courage.

Disregarding the role of people in struggle and insistence on armed strategy as well as imposing its ideological dogmatism has raised big questions, after the Islamic revolution, over its formation and the cause for its existence. The motivation and the real objectives of the main founders, among whom faithful, devoted ones existed, have also encountered a big question mark. Mojahedin’s change of guideline aiming to assume power at all costs led it to an absolute ideological drift and, consequently, to the precipice of being dependant on imperialism. The heavily advertised glories of its past military achievements evaporated soon after its collusion with Saddam, an archenemy of Iran, its transmission into a cult, and its direct beg of support from the US to overthrow the Islamic Republic.