I would like to introduce MRS. MAHVASH SEPEHRI( NASRIN), who is the second woman in women commanding section after MARYAM RAJAVI and known as prestige demolisher. Actually she is 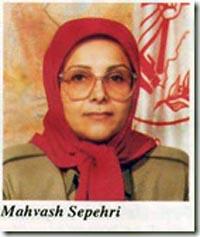 MARYAM RAJAVI’s replacement and her deputy. she is too devoted to the leaders of this cult, and she was true and genuine subordinate of MASSOUD and MARYAM RAJAVI. She was in charge of PMOI’s governing council and deputy of the commander in chief of NLA , MASSOUD RAJAVI .She had been in charge of all urbane gureilla warfare which happened in IRAN by PMOI’s gureillas since 1995.she formulated the notorious sessions known as amaliyate jari(the current operation) and ghosleh hafteghi(weekly purification), which were created to suppress and detect the people’s minds and thoughts. she is very famous of propagation bad language , insult, swear and curse among PMOI’s people especially in those notorious sessions mentioned above . she was very good at demolishing member’s prestige and personality . she was helping Maryam Rajavi in theorizing the ideological revolution to make it easier for brainwashing the members of this cult. she was in charge of sending too many operational teams to Iran , and the majority of those teams were destroyed or captured and arrested by Iranian police and security forces .she was totally against sending the PMOI’s dissidents who did not want to continue co-operating with PMOI, to foreign countries ,and she was backing her boss’s idea up regarding to handing over the dissidents to saddam Hussein’s agents in abughorib prison to be utilized for exchanging with Iraqi soldiers who were captured by Iranian army during Iran- Iraq war.MRS. MAHVASH SEPEHRI was in charge of the horrifying gathering and sessions called and known as (DIG) which in English version means pot and boiler. In those sessions all the members had to participate and it was totally compulsory and forcibly. those sessions were established to suppress and destroy any dissent in member’s mind and it was accompanied by brutal and savage treatment such as beating ,spitting at, swearing and insulting by the operatives and high ranking officers of this cult. those sessions were usually lasting up to 15 hours. During those 15 hours the dissidents were under horrendous pressures from the participants in that session, and MRS. mahvash sepehri was provoking the participants to attack the dissidents either verbally or physically. In those sessions MRS. Mahvash Sepehri was imposing people to use vulgar language and swear against the dissidents to destroy their resistance , and force them to accept and obey the harsh and inhuman cultish rules. she disappeared after the invasion of Iraq by USA, and she is probably hiding somewhere . why is she hiding ?why dose not she want to appear in public? I have the answer. she is afraid of being questioned by authorities about killing of all those innocent people in Iraq in co operation with Saddam Hussein and his government. she is afraid of all those suppressions and repressions that she has done against the dissidents in side of PMOI. yes she has done lots of crimes for that reason she is hiding. she is a criminal