Alert and alert, the West states must be on the highest alert and feel moral and political responsibility to prevent more disastrous incidents in Ashraf garrison which can terrorize then jeopardize the local peace and security. 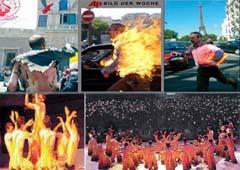 Maryam Rajavi (Iranian Ben Laden) has already tested the success of such an adventurous experience in Paris in June 2003 to achieve her terrorist aims and political blackmails. so that, she issued an ideological command to her cult innocent and deceived members to resort holy self-burning suicide with the intention of de-stabilizing the French political atmosphere to impose her illegitimate conditions on French govt. not to extradite her to Iran because of her terrorist committed crimes in Iran. The price of such an adventurous action was the destruction of two tempting women in France in June 2003. The more delay the heavy human losses in the Ashraf garrison as occurred in Paris in June 2003. Therefore, as a separated ex- member of the “People Mujahidin Organization of Iran” (PMOI) who have been under inhuman psychological and physical torture by this chaotic sect cal l for the urgent and press actions and efforts without any hesitation to salve the live of thousands incarcerated innocent victims in Ashraf garrison situated in Iraq. If the West public opinion and political elites consider the demoniac and inflamed message of Maryam Rajavi’s husband who is the ideological leader of this cult, they will find out that the history is going to be repeated again and create a new Paris self-burning disaster in Ashraf garrison with the highest dimensions of creature of the human catastrophe. Masood Rajavi stimulated and encouraged the caged victims of Ashraf garrison to upheaval against Iraqi elect govt. sovereignty and not to obey the rules and regulations, which has been passed by Iraq constitutional assembly. He intimidated Iraqi govt. to imply with his illegal demands not to impose Iraq dominion over his unlawful self-govt. in the territory of Iraq. Otherwise, he will openly goad and compel his deceived innocent victims in Ashraf garrison to start a hunger strike and if they cannot get their demands from Iraqi govt., they must resort self-holocaust solution to make the West public opinion to support his illegal demands. The authentic sources familiar to his violent nature and characteristics believe that Masood Rajavi’s message is too bloodthirsty and full of intimidations, desperations, and self-contradictions and he does not care how many people will be on fire and killed in his self-created holocaust. Now, I, as a survivor of this terrorist cult ask the West public opinion and responsible authorities to take Masood Rajavi’s message serious to avert Masood Rajavi’s latent holocaust in Ashraf garrison. According to an Iranian axiom, “when you push a wild cat on the ring or on the corner of the room; the cat will scrape and claw you.” It means that when there is an absolute impasse and no alternative to rescue the live and change the conditions, the reaction of such wild animals with violent natures towards such dead end conditions are unexpected, desperate, vague, and outrageous. As a result, the reaction of wildcat is adventurous and violent, it may invade you by any weapon, and way and bomb commit either suicide or self-burning. Based on the past Masood Rajavi’s terrorist adventures in the occasions of impasse conditions and political catch-22, the experience shows that, he is always endeavoring to theorize his cultic conspiracies to prepare the atmosphere for terrorist adventures. That is why he used the language of threat in his message vs. Iraq elect govt. several times in different ways and tried to place the responsibility of his future prepared terrorist activities on the shoulder of Iraq govt. and the rest of the world. That is why; the most significant part of his message is that “the world can not be in the peace and security without the establishment of security in the Ashraf garrison” where is his main and key base for preparing terrorist activities. The reality is that, if the West states are not determine to take necessary action regarding Masood Rajavi’s expressed threats today, thus, tomorrow will be too late. Moreover, the human beings will face the reiteration of Paris self-burning disaster in Ashraf garrison with the highest terrible dimensions. Therefore, the fenced in Ashraf garrison victims are expecting the human consciences and human rights organizations not to hesitate in rescuing them.
Iranpeyvand