Al-Arabiya Television at 1327 gmt on 9 June reports the following: "The Iranian opposition group, Mojahedin-e Khalq, whose headquarters in Iraq are confined to Camp Ashraf in Diyala 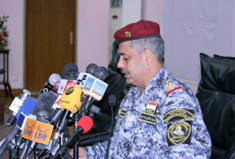 Governorate, has reported that the Iraqi Police’s Rapid Response Forces tightened their embargo on the camp’s occupants and banned the entry of goods and people to it.

The Iraqi Committee for the Defence of Camp Ashraf had issued a statement denouncing the tightening of the noose around the group by the Rapid Response Forces as well as threats to the camp’s occupants of murder and arrest, warning of a possible humanitarian disaster."

Asked if the government is planning to close down Camp Ashraf, Staff Major General Khalaf says: "As an Interior Ministry, we are responsible for certain matters relating to the camp, such as providing protection for the camp and securing its outer perimeter; guaranteeing the entry of humanitarian goods as stipulated by international agreements – a matter that we handle in transparent fashion; and ensuring that the camp’s residents do not interact with security forces, and all three of these objectives are being met."

He adds: "Some of the security units were replaced – the brothers dispatched by the Interior Ministry left certain positions – and the Interior Ministry is bound by the constitution to provide protection – and is capable of doing so – but its work is hampered by these people [the Mojahedin-e Khalq], who are escalating the situation with certain positions and statements and are providing wrong and highly exaggerated accounts. Interior Ministry personnel have not interacted with them at all, and no siege has been laid around the camp. The camp has certain outlets through which some humanitarian goods and basic necessities are allowed to pass, and they remain operational."

Commenting on the accusations made by the Committee for the Defence of Camp Ashraf, the major general maintains that "there has been no interaction with the camp’s residents, and the protection forces are stationed around the camp’s perimeter, so how can there be a tightening of the noose? How can the noose be tightened when the camp has specific outlets and when more than one party – not just the Interior Ministry – are overseeing the camp? One of these outlets is located near a Multinational Forces position and these forces can see what is happening."

Asked if "you have any political or military orders to close the camp in the near future," Staff Major General Khalaf says: "No, not at all." He reiterates the role of the Interior Ministry in securing the camp and regulating the flow of goods into it.

Mujahedin and manipulation of religion