Archbishop of Canterbury stresses US, Iraqi governments have duty to protect People’s Mujahedeen from abuse 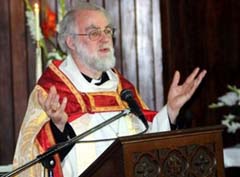 LONDON – The head of the Church of England said Sunday that Iraq and the United States have a duty to protect Iranian refugees in a camp in Iraq from violence or abuse.

"There is a strong argument in terms of international law that the Ashraf residents are ‘protected persons’," he said in a statement.

Iraq gained sovereignty over the camp on January 1, following the expiry of a UN mandate that had given US forces responsibility for the camp.

The archbishop said a UN monitoring group should be established to visit the camp, which is home to 3,500 People’s Mujahedeen members and their families.

Williams, who met a group of Ashraf supporters last week, urged protesters in Britain to end their hunger strike in support of the camp residents.

US ambassador to Iraq Christopher Hill earlier this month vowed to press the Iraqi government, which the Mujahedeen say answers to Tehran, to live up to assurances to treat the residents humanely and make sure they are not repatriated to Iran.

The People’s Mujahedeen, an Islamic movement, was founded in 1965 in opposition to the shah of Iran. It has subsequently fought to oust the clerical regime which took power in the 1979 Islamic revolution.

The group set up Camp Ashraf in the 1980s — when former Iraqi dictator Saddam Hussein was at war with Iran — as a base to operate against the Tehran government.

MKO Camp Comes under Iraqi Siege after Torturing of Members