On Saturday, Sep 30th,a number of families whose children are captured in Camp Ashraf, visited Mr. Afshin Fallah who has recently been released from the bars of Rajavi’s Cult.The meeting was very useful for Nejat members. 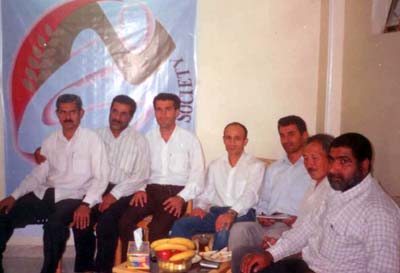 During the meeting, a member of Nejat Society explained about the recent clashes at Camp Ashraf where “Iraqi Police wanted to establish a station and faced MEK’s violent resistance. The leaders of the cult made some of their dissident members to encounter Iraqi forces and then to be injured, killed or arrested. “

“Another trick, MKO played to abuse the members, was the hunger strike show to bring the West’s attention to itself” he added.

Then, Mr. Afshin Fallah Qareh Tapeh told his story introducing himself as an educated person who had traveled to Turkey where he had been recruited by MKO.

He told that in Turkey he met a person named Shahram and joined the organization after he was impressed by his words. He was told that he could earn more money in Europe but at first he should stay in quarantine in Iraq for some time. Afshin accepted to go to Iraq…

Mr. Fallah explained that he was threatened by the cult leaders to be handed over to Iraqi officials although he declared his opposition against the group from the early days of his entrance. He was also threatened to be labeled as IRI’s spy. “so I kept quiet for a while but I heightened my protest when I found out my life would be futile in that desert, so finally they sent me to American Camp where they introduced me as a criminal to American soldiers and asked them to look after me.” When the American camp (TIPF) was shutdown, he went to Iraqi society where he could get to know about Nejat society. He went to Iranian consulate and returned to Iran. “Now that I am here with you I am married and living a happy life with my family” he said.

At the end of the meeting the family members of Ashraf residents who were members of Nejat Society, Golestan branch, signed a petition and asked for:

The names of signatories: