In world of politics, there are various parameters that lead a politician to achieve his political objectives. One of the most essential factors in political success is realism. The more a politic man views political phenomenon realistically, the better he can deal with situations, never pretending the situation is different. 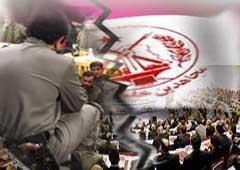 Therefore he is always prepared to present practical ideas of what can be done in that proper situation. A realistic, logical attitude will rarely end with failure or disappointment but this imperative attitude is one of those characteristics that MKO leaders fail to have. As the ideological leader of MKO cult, Massoud Rajavi has never had a realistic view on the world and especially Iranian political situation so he could never state a rational viewpoint about the political changes taking place around the world including Iran.

Since 1970s, following the execution of most MKO key leaders in Shah’s prison that left Rajavi as the main leader of Mujahedin, he has never made a realistic decision. The starting point of his illogical approach was the declaration of his armed struggle in June 20th, 1981 when he thought that he could defeat the Iranian Islamic Revolution that had succeeded the previous year due to the outstanding support of Iranian people for Ayatollah Khomeini’s leadership.

Then he fled to France where he found his so-called National Council of Resistance. Once more he dreams of the coalition of Iranian Opposition groups against IRI although the majority (about 95 %) of the council members are from Mujahedin Khalq Organization! The failure of his second step (foundation of NCRI) led him to take the third absurd step: going to Iraq and sheltering near the most hated Iraqi dictator Saddam Hussein. In Iraq he based his organization’s structural system on cult-like practices. He used his illusions to deceive some revolutionary–minded individuals by manipulative indoctrination methods.

He founded his cult of personality based on worshiping the leader ( Massoud Rajavi) and absolute obedience of leader’s orders. He trained some devoted members who were always prepared to kill themselves for their “Ideological Leader”!

In camp Ashraf, Iraq, around the cult of Rajavi nothing seems realistic. The members are isolated in an unreal world that Massoud Rajavi has created for them due to his illogical ambitions.

Another example of Rajavi’s illusionist personality is his so-called Eternal Light Operation in which Mujahedin were supposed (according to Rajavi) to reach Tehran in three days. In a crazy operation, Mujahedin drove their armored vehicles toward Iranian border in the vain dream of moving on Iranian cities one after the other and reaching Tehran. Of course, the operation failed and left thousands of casualties for MKO.

After the defeat of Eternal Light, he launched stricter cult jargons to keep the members in the illusional atmosphere he had made for them. Celibacy became obligatory under his order, sexual relations were forbidden, and children were separated from parents. And all this was because of the struggle that he always convinced the members to win soon. But the truth is that his so-called struggle has had no outcome except the victimization of thousands individuals and families.

Massoud Rajavi even continued his delusional attitude in the incidents after the Iranian presidential election in June. He saw himself as an influential leader in Iranian political scene, published a message suggesting solutions for critical situation of Iran. Imagining to have public support, he followed his dream of power in Iran but the clear fact is that today the least minority of Iranians know a little about MKO.

During the 3 decades that Massoud Rajavi was dreaming of power in Iran, and trying to capture some people for his cause, no significant change has happened to MEK. Their only skill and trick as well is launching propaganda against Iranian regime on its nuclear program. As another misfortune for MEK leaders, the West pays no significant attention to MKO’s show-off about Iranian nuclear program since their claims could not be verified due to the ambiguity.

The world Rajavi has created is far from wisdom and logic. Nowadays, in the era of democratic changes, in the world of civil behaviors and negotiations, the crisis mongers of Rajavi’s cult seem so amazing. They are actually fighting the reality and this fight will definitely end with failure.
By Mazda Parsi

Severe punishments for not participating in MEK anniversary