In November and December 1978, the press and news agencies published and spoke of the letter written by Senator Edward Kenedy to Ayatollah Khomeini, along with US efforts to release American hostages in their Embassy in Tehran.

Following the news, MEK publish an article ironically titled “Kenedy becomes a supporter of Islam!!” in their official journal “Mojahed”, attacking the American politician by the sub title :”behind the curtains of all conspiracies against Iran, the hands of huge imperialist capitalists, Kartels, trackers and corporations are covered.” [ Mojahed No.16 – P.9 ]

The article included some paragraphs of Kenedy’s letter quoting that he was “perfectly supporting the Islamic Republic.” MEK called it “hypocritical policy” and wrote :”…isn’t it surprising and even funny that an imperialist senator pretends himself as a supporter of Islamic Republic?…” [Mojahed No.16- P.16 ]

The same journal of MEK speaks of Senator Edward Kenedy as MEK’s supporter, who sends a message to Iranians residing in Massachusetts to invite them to attend the group’s demonstration in April, 1991; Appreciating Senator’s efforts for democratic changes in Iran. [Mojahed No.294- P.41]

In 1994, when the US State Department published a report on MEK and its terrorist Marxist background, NCRI (MEK’s political wing) tried to cleanse the accusation in a rush act claiming that the organization has never been in anti-US front especially during its 28-month political phase between February 1978 and June 1979 and even it had been in opposition to anti American movements!

In its arguments, MEK tried to appease US by putting the blame on dead movements like “Tude Party”(Communist Party) as an anti American Marxist group.

Regarding MEK’s background and testimonies and documents on the group’s attitudes and acts, one may consider two suppositions:”first, MEK’s interests and position in 1978 were those that were declared by them and what they are now trying hard to deny had in fact been existed.

Second, MEK’s today declarations are “meanly true” and the group has never been a serious, true anti US movement.

The first supposition results in this conclusion that MEK is going on a path that separates it more and more from the Iranians and pushes it more and more to a cult-like group. It has shifted its positions from an anti-imperialism movement to a beggar to White House and Pentagon’s support.”

In case that the second supposition is true, there will be another evidence for the hypocritical attitude of MEK. 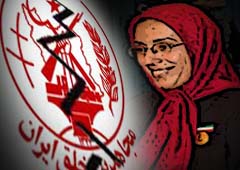 Who deceives the US? Martin Kobler or the MKO?