On Saturday 5 June Shahab Husseini son of Mohammad Hussein born in Tehran, escaped from Camp Ashraf. Shahob Husseini had been with the Mojahedin-e Khalq for twenty four years. Since the Government of Iraq took responsibility for the camp in 2009, a steady stream of MKO members have successfully managed to overcome the immense difficulties imposed on them by the cult leaders and have managed to leave. 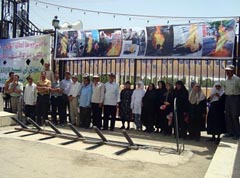 Two days earlier the families encamped outside Camp Ashraf waiting for news of their children celebrated Iranian Mothers’ Day. The fact they are separated from not only their long-lost children who are being held hostage inside the camp by MKO leader Massoud Rajavi, but are also far away from their other family members back home, did not deter them from having a good time. They remain cheerful and optimistic. They will succeed eventually in their aims.

The families have warned Rajavi and his Western backers that they will not allow their children to be used as human sacrifices as other MKO members have in the past. Pictures of the self-immolations ordered after the arrest in Paris in 2003 of Maryam Rajavi were raised above the gates of Camp Ashraf to remind the world of the crimes of the Rajavi cult against their own members.