As you are well informed through many revelations which have been accomplished by many freed and rescued former members of pmoi (Rajavi’s cult) in recent months , since eight months ago many desperate elderly people who are the family of some of those captivated members 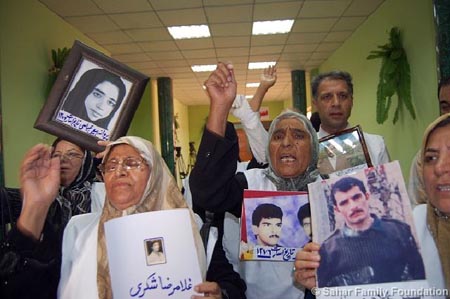 inside the military garrison ,so called Ashraf base located in Diyali province ,the township of khalis, have been picketing to show their complaint and protest against the pmoi’s leadership and operatives who do not allow them to meet their loved ones in Ashraf which is one of the preliminary rights of any human being. Those mentioned families have been badly threated by the operatives of pmoi whom in many occasions have passed and violated the red line of human rights charter. I would like to draw your attention to some of those violations which are as follows:

The pmoi operatives have slandered and accused those honorable families ,who are mostly elderly people, by bringing some of their brainwashed members to swear and curse those families .

The high ranking members of this cult have attacked those families in the groups of 40-50 and in one occasion one of the woman commanders with the name of Hengameh Haji Hassan attacked those families with a sharp cold arms to harm them but fortunately her vicious and violent act was thwarted by Iraqi police who were present at the scene.
The pmoi leadership have forced and coerced some of their brainwashed members to participate in pmoi TV program so called Simayeh Azadi to swear and accuse those elderly people whom are their relatives. If those chosen miserable members refuse their leadership orders , they will be badly punished and pestered by the operatives of pmoi.

The tough security measures have been carried out inside Ashraf garrison by the direct order of pmoi leadership based in France specially after the escape of 6 members from Ashraf garrison. Two of those escapes have occurred recently , but two other escape attempts were failed and they got arrested and beaten up by the operatives of pmoi.

The people who succeeded to escape mentioned that the leadership of pmoi has intimidated all the members of being tortured and killed by those elderly families and Iraqi police if they try to escape from Ashraf garrison .

The pmoi leadership has mentioned and pointed out that the Iraqi government does not allow those families to meet with their loved ones but this statement is completely untruth and is a big lie which pmoi leadership by telling it wants to cover the real reason.

We are former member of pmoi and human rights activist urging and entreating all human rights organizations specially Red cross organization and Amnesty international to step forward and intervene in this humanitarian incident and force pmoi leadership to allow those families to see and meet their loved ones whom have been deprived of having any sentiment and love to their families because of tough and vicious cultic regulations and policy for a long period of time.