I am Shahram Heidary. I was born in Khuzestan, Iran in, 1966. I became an MKO sympathizer in 1987. I left Iran to join the MKO by the help of a human smuggler who was sent to me by the group. I arrived in Camp Ashraf in 2005. 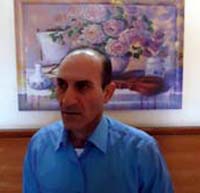 I attempted to escape “Ashraf Prison” on September 15th, 2011 but I was arrested by the MKO guards. I was then tortured and interrogated severely. After a period of imprisonment, I went on hunger strike, which ultimately resulted in my release. They submitted me to the Iraqi Police.

When I was in Iran, I was manipulated by the MKO’s propaganda. I thought that it was every body’s desire to join the MKO in Ashraf but after a short while I found out that Ashraf was just a mirage. Once I realized the truth, I was captured in the cult and had no way back.

I scarified my wife and children for a deceitful organization. Although I lost everything, I could release myself from the terrifying hell of Rajavi.

I hope that my friends who are still under exploitation and imprisonment by the cult of Rajavi will be released from that nest of hypocrisy and deception with the help from the outside world as soon as possible.