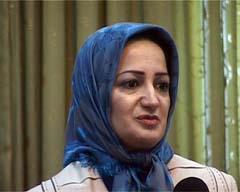 diseases, and that death toll has increased among members due to heavy psychological pressures and mental distress.

According to a report by the Persian-language Neday-e Haqiqat (the Voice of Truth) website, Maryam Sanjabi, a former ringleader of the MKO, said, "The reason for the high number of cancer and stroke patients among the 3,000-strong population of the MKO is the psychological and mental pressures imposed on them by the MKO ringleaders during the previous years."

She said that over 50 people in Ashraf and Liberty Camps in Iraq have died of cancer, stroke or other incurable diseases during the last 2 years, adding that the MKO leaders do not allow patients to leave the camps to receive treatment in Iraq’s hospitals.

Open letter of the Faryadeh Azadi to Mr. Kobler