Unsatisfied in "crippling" Iran with sanctions, the US looks to be set for active operations there – and already has an in: a group called the Mujahadin-e Khalq, which in the near future could become the Persian equivalent of the Free Syrian Army. 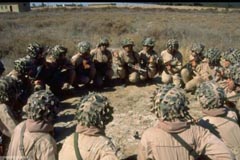 What is MEK? Mujahadin-e Khalq is an Iranian Islamic militant organization in exile that advocates the overthrow of the Islamic Republic of Iran. Since its inception in 1965 in Iran, the group conducted assassinations of US military personnel and civilians working in Iran in the 1970s, jubilantly supported the takeover of the US embassy in Tehran in 1979 and opposed the release of American personnel, calling for their execution instead, fought against the Islamic Republic together with Saddam Hussein during the Iraq-Iran War (1980-1988) and set up headquarters in Iraq at Camp Ashraf.

In recent years, according to various sources including NBC, MEK teamed up with the Israeli secret service to kill Iranian nuclear scientists. NBC reported that US officials confirmed that “the Obama administration is aware of the assassination campaign but has no direct involvement”.

In 1994, the State Department sent a damning 41-page report to Congress on why the MEK is a terrorist organization; that designation was enacted in 1997. The report concluded: “It is no coincidence that the only government in the world that supports the Mujahadin politically and financially is the totalitarian regime of Saddam Hussein.” Well, the MEK’s mission to overthrow Iran’s leadership has not changed since, but the US agenda has: In a vertiginous about-face, Washington became the powerful protector of the Mujahadin-e Khalq.

Top Washington lawyers and lobbyists made the case for the terrorist group as well: Akin Gump, Strauss Hauer & Feld, Patton Boggs and others. Robert Strauss, of the firm of the same name, was US Ambassador to the Soviet Union during the critical months of August 2, 1991, through December 26, 1991. A senior member of the firm Tobi Gati was also head of the intelligence branch of the US State Department.

When speaking about terrorist groups, one might think of MEK as a ragtag bunch of cutthroats in shreds and tatters, confined to an unsanitary tent city. The truth is nothing of the sort. Watch this report by CNN’s Michael Ware dating back to 2007: You will see a marching army in crisp brand-new white-and-blue and khaki uniforms, entering a spacious parade ground framed by sculptures of lions. Camp Ashraf itself is one of the best-kept military facilities in Iraq and a sprawling city of 4,000 people, with shopping centers and hospitals, gardens, monuments, fountains and illuminations quite unexpected in the war-torn deserts of Iraq. The MEK is also armed with more than 2,000 well-maintained tanks, artillery, anti-aircraft guns and armored personnel carriers. Its supplies are guarded by US military police, and the camp itself is guarded by the American military.

Indeed, “The coalition remains deeply committed to the security and rights of protected people of Ashraf,” US Major General Gardner said, according to a Headquarters Multinational Force Iraq document dated March 11, 2006. Michael Ware calls the MEK “the US’ officially protected terrorists.” Another film of Australian origin shows Camp Ashraf’s own parliament and hundreds of tanks on the camp’s parade ground.

Well-versed in American political mores, the MEK’s leadership says the group is ‘pro-democracy.’ However, even the New York Times disagrees: In the middle of the 2011 de-listing campaign, it described MEK as “a repressive cult despised by most Iranians and Iraqis.”

‘Totalitarian cult’ is indeed the most frequent label applied to the MEK by people who come in contact with the group. And American support for MEK is not limited to military protection. Seymour Hersh, in his New Yorker piece“Our Men in Iran?” revealed that beginning in 2005, MEK fighters were trained in Nevada by the Joint Special Operations Command (JSOC).

Why is Washington backing the MEK? As General Shelton said at a conference in February 2011, “When you look at what the MEK stands for, when they are antinuclear, separation of church and state, individual rights, MEK is obviously the way Iran needs to go. … By placing the MEK on the FTO [Foreign Terrorist Organizations] list we have weakened the support of the best organized internal resistance group to the most terrorist-oriented anti-Western world, anti-democratic regime in the region.”

In an interview with Germany’s WDR TV back in 2005, ex-CIA operative Ray McGovern explained the logic: “Why the U.S. cooperates with organizations like the Mujahadin, I think, is because that they are local, and because they are ready to work for us. Previously, we considered them a terrorist organization. And they exactly are. But they are now our terrorists and we now don’t hesitate to send them into Iran …. for the usual secret service activities: attacking sensors, in order to supervise the Iranian nuclear program, mark targets for air attacks, and perhaps establishing secret camps to control the military locations in Iran. And also a little sabotage.”

Karen Kwiatkowski, formerly with the Department of Defense, makes a long story short for WDR TV: “MEK is ready to do things over which we would be ashamed, and over which we try to keep silent. But for such tasks we’ll use them.”

Now is the time for Russia and the world community to take active political measures preventing the United States from launching another proxy war in the Middle East. The MEK is much better trained and prepared for war than the Syrian rebels were at the beginning of the conflict, or even today. The MEK has all the necessary capabilities to become the military arm of an American attack against Iran. This time – unlike in Syria – the world should not ignore the march to war, and must take steps to prevent it from happening again.

­By eronika Krasheninnikova, Director General of the Institute for Foreign Policy Research and Initiatives in Moscow, for RT

The statements, views and opinions expressed in this column are solely those of the author and do not necessarily represent those of RT.