Nejat Society, Mazandaran Office: Mr. Mohammadi, what did you and your colleagues think of camp Liberty (TTL) before you moved there? 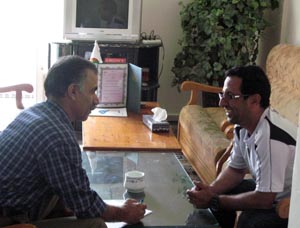 Majid Mohammadi: as you know, Camp Ashraf was an isolated, restricted place where members were under a 24-hour controlling system. When the idea of moving to Liberty was proposed, the majority of guys thought that they would finally go to another place in which they would not be limited and controlled and they would be able to have access to the outside world.
In our private talks, we said that we would ultimately find a way to leave Iraq. Some of the members, who did not want to return to Iran, were happy because they thought that Liberty would open the way to go abroad.
But, we didn’t know that Rajavis intended to build another Ashraf in Liberty.

– What do you mean by building another Ashraf?

– I mean that the organizational control and cult-like practices exercised by the Rajavis, at Camp Liberty was worse than those applied at Camp Ashraf. MKO leaders knew that Liberty is not like Ashraf. It’s not an isolated, closed location with no access to the outside world so they enhanced the organizational control in Liberty to prevent defection and eventually the collapse of the cult.

From the beginning of our arrival at TTL, one of the criminal commanders of the MKO, named Abbas Davari, who had been previously sent there, started holding meetings for members. He said:”The difference between Liberty and Ashraf is that the former was completely under our control, no one was able to interfere in the organization relations but here at Liberty we are dependent on the outside world and Iraqi forces. We should work hard to maintain this Camp and chang it to another Ashraf.”
In order to assure those who realized what “loosing Ashraf” meant, he said, ”It is right, Liberty is a temporary Camp but you should know that Ashraf has been reproduced .We never
leave Iraq.”

At Camp Liberty, they could not fill members’ schedules with forced labor so they held numerous mind control meetings. We attended various manipulation meetings for over 12 hours a day.

– Mr. Mohammadi, speaking of your full-time schedule in Liberty, what was your daily routine?

– From early in the morning (at prayer time) until late at night, we were planned to labor. The cult authorities made us do futile works. For example, they had us move the sand in the camp under the pretext of building streets. Our daily routine was to move the sand to places the authorities said, but as the space was limited, when the task was done, they would find faults with us. they said,” Your female superior doesn’t approve your work” or” you should follow the plan that sisters used”, etc. Once again members had to move the sand to another place, thus our working time was full.
Regarding meetings, I said, twelve hours a day. Our daily routine was to eat breakfast and then to carry the sand until 10:30 am. Then we had a break and we had a meeting until noon.
After lunch, the meetings continued until sunset when we had a break to drink tea. Then we used to go playing sports, however, there wasn’t any possibility for playing games. After dinner time, again we had to attend meetings until midnight.

– How long did you stay at Liberty? How was the condition and facilities there?

– Liberty was a marshy land near our port. It had been known as Saddam Hussein’s hunting ground. After American invasion, the land was dried and filled with sand by US forces and their base was built there. Considering MKO expulsion from Iraq, the camp was allocated to the group as a temporary transit location following the agreement signed between UN representatives and Iraqi government.
A part of this region, about 500 square-meters, in the heart of Iraqi units was allocated to settle MKO forces.
Iraqi police has six stations inside the base.The camp contains 7 parts and each port is divided to 4 blocks. Residents live in Conexes, each conex is resided by 7 people. it is worth to mention that, according to arrangements made by UNHCR supervisor, each conex was due to be allocated to two people but the cult leaders placed 7 people in every conex in order to prevent private meetings and to control members more strictly. The other conexes were used for mind control meetings such as Current Operation and Weekly Cleansing and also for commandants.
Based on the agreement signed by Iraqi government and UN authorities, each Conex should be equipped with TV, air conditioner, telephone etc. until the two residents are granted asylum and leave the camp. But the cult leaders confiscated all Telephones.
The Televisions had no antenna. We were just allowed to watch the MKO channel in the eating place at specific times.
In order to impose more pressure and more limitation, they did not allow us to use the facilities left by American troops. For example, we were not permitted to use the gym which was highly equipped. This was their excuse: ”If we open the gym, members want to build their body, and this is definitely for their desire to have wife and a normal life. So, suggesting the idea of using the fitting center is kind of opportunistic act.” The authorities even did not let us use the exercise mats of US soldiers.”They have the smell of life, they shouldn’t be used “, they said.

– Did the mind control System work the way it worked at Ashraf?

– Yes, exactly. The transfer of members from Ashraf to the new place which is called Temporary Transit Location has changed members’ spirit. The cult leaders have to increase their control over members so that they can maintain the cult-like relations and structure. They hold long-time meetings, gather all members together. They seriously fear members talking to each other in order to prevent members from communicating with their peers; they have divided that 500 – Square-meter place in to smaller areas using bags of sand. The 7-people conexes are divided to two units and each unit is supervised by a high-ranking member to extend their 24-hour control over members.
The camp authorities are severely afraid of members’ gathering in a place. Members are not allowed to gather in the eating place at the same time. Each unit has to attend special ceremonies under the supervision of its own commander who tells them where to sit and when to leave the hall.
On the other hand, they claim that the pressure imposed at Liberty is actually originated in the war we have against Iran. They say,” we are in the battle.”
They try to manipulate members so as they cannot think anything else and ultimately come to different conclusions and decisions.

– What did the MKO leaders think of leaving Iraq?

– As a whole, they suggested that they would not leave Iraq whether at Ashraf or Liberty.
As an obvious contradiction, they told high-ranking members that they would turn TTL into another Ashraf arguing that the Arab Spring would bring change to Iraq too and this way the situation would turn in favor of their cult. But, for low-ranking members, they had another argument.
They told them to be patient until the problem for leaving Iraq would be solved.”If you don’t want to stay with us, be our guest for some time until a solution is found to your problem but don’t give up and don’t go to Iran,” they told us.

Another thing that I should mention about pressure at Liberty is that Rajavi’s nonstop printed and audio messages were the actual troubles for members.
He tries to convince forces not to give up, to stay there. This way, the commandants could more easily suppress the members.
In his last message, he offered four options to the members:

First: if you announce your defection, we deliver you to Iraqis and they will consequently hand you to Iran where you will be tried and executed.
(it is worth to know that before offering such an option, we had attended numerous meetings in which we were told that we would be tortured and executed in Iran so everyone was terrified of going to Iran. After our minds was manipulated ,this option was suggested.)
Second: if you have a good family in Europe, they can follow your case to take you there. (Practically such a solution was impossible for the majority of members who had no one in Europe.)
Third: stay a Mujahed and leave your fate to the Organization.
And after some time he suggested the forth option:
“Stay with the MKO as a guest”. The result of all these options was to stay in the cult and to get depressed in their dirty practices.
In all his messages, Rajavi considered return to Iran as treason. He had made a taboo out of this option.

– Mr. Mohammadi, what’s your idea about the fate of members who are currently imprisoned at Liberty?

– In my opinion, the MKO case in Liberty is just the same as its case in Ashraf. Members should again be staying in suspense for a long time. Although, they have been delisted by European Union since three years ago, not even a member could manage to leave Iraq.
In addition, the cult authorities do not want the members to leave the cult establishment and Iraq. Indeed, the Rajavis are the obstacle against MKO expulsion. I believe that Rajavi doesn’t hesitate to make a thousand people die in order to prolong his stay in Iraq.

– What’s your suggestion to help them leave Iraq as soon as possible?

– As the presence of families at Camp Ashraf had awakened the members for escaping the cult, their presence at Camp Liberty will also be helpful regarding the fact that Liberty is much smaller than Ashraf in size and suppression is much stronger there. Families can play a key role n liberating their loved ones.
Families can assure their children that they are able to make the right decision for their fate demanding UN representative visit their beloveds.

– Thank you for the time you gave Nejat Society. And last question, what do you do now?

– I’m a construction worker and I will soon get married being impressed by Maryam [Rajavi]’s ideological revolution!