“Iraqi people do have a dark memory of Mujahedin-e Khalq organization (MKO, a.k.a. MEK and PMOI), and the decision for their expulsion is a key and national decision,” said an Iraqi Kurdish member of parliament. 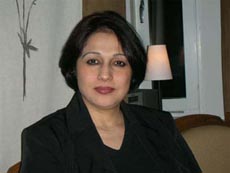 Parizad Shaban was quoted by Ashraf News as saying that the hands of the Mujahedin-e Khalq organization (MEK, a.k.a. MKO and PMOI) are “smeared with the blood of people of southern and northern Iraq,” and the wounds of these people have not been healed yet.

MKO fled to Iraq in 1986, where it was welcomed by Iraqi executed dictator, Saddam Hussein. In return, MKO helped him suppress Shiite and Kurd uprisings in the Arab country in 1991.

Parizad Shaban called on all organizations and the media to work for the clarification of the crimes of this group-let for Iraqi people as well as the people around the world.

Surprised by the silence of some politicians and activists on the crimes of MKO, she reiterated that the presence of this group in Iraq “has no legal basis” and that Iraq is opposed to their presence on its soil.