Terror Group is Sounding Board for Dubious US Intel

Embracing its recent removal from the U.S. State Department’s list of designated foreign terrorist organizations, the Mujahedeen-e Khalq (MEK), an exiled Iranian terror cult with deep pockets and close ties to the

Washington establishment, is attempting to ramp up the fear-mongering and propaganda over Iran’s nuclear program following last month’s election of moderate cleric Hassan Rouhani as the Islamic Republic’s next president.

In April 2013, the group opened an office in Washington DC and officially registered as a lobbying organization the following month. 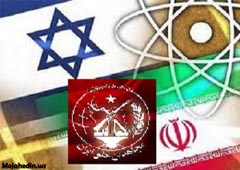 Now, a Reuters article from July 11, 2013 reported the MEK and its affiliate organizations such as the National Council of Resistance of Iran (NCRI) claim to have “obtained reliable information on a new and completely secret site designated for [Iran’s] nuclear project,” despite providing no credible evidence to back up the allegation.

The supposed site is said to be “located in a complex of tunnels beneath mountains 10 km (6 miles) east of the town of Damavand, itself about 50 km northeast of Tehran.” The MEK claimed that construction of the site began in 2006 and it was recently completed. “The site consists of four tunnels and has been constructed by a group of engineering and construction companies associated with the engineering arms of the Ministry of Defence and the IRGC (Iran’s elite Revolutionary Guards force),” a statement from the terror group said.

As in nearly all media reports on the MEK, Reuters credits the group with having “exposed Iran’s uranium enrichment facility at Natanz and a heavy water facility at Arak” in 2002. But beyond the fact that Iran’s nuclear program was never a secret, this specific claim is untrue, as nuclear experts Jeffrey Lewis and Mark Hibbs pointed out back in 2006.

In fact, the U.S. intelligence community had been tracking Iran’s nuclear facility development for quite some time, notably its construction at both Natanz and Arak. Lewis notes that, in 2002, “someone leaked that information to an Iranian dissident group, the National Council of Resistance of Iran (NCRI), which then released the second-hand dope in a press conference where they got the details wrong.” The information the MEK supposedly gleans from sources inside Iran are actually just leaks received from intelligence agencies in the United States and Israel.

Since then, the MEK has not itself provided a single shred of credible information regarding Iran’s nuclear program. Furthermore, in early 2007, an unnamed senior official at the International Atomic Energy Agency (IAEA) revealed to the Los Angeles Times, “Since 2002, pretty much all the intelligence that’s come to us [from the United States about the Iranian nuclear program] has proved to be wrong” and has never led to significant discoveries inside Iran.

“They gave us a paper with a list of sites. [The inspectors] did some follow-up, they went to some military sites, but there was no sign of [banned nuclear] activities,” the official told The Guardian at the time. Additionally, the LA Times reported that “U.S. officials privately acknowledge that much of their evidence on Iran’s nuclear plans and programs remains ambiguous, fragmented and difficult to prove.”

Additionally, the Associated Press reported this past May that, when it comes to accusations about the Iranian nuclear program and despite their terrible track record, “about 80 percent of the intelligence comes from the United States and its allies.”

Reuters, writing about the MEK’s most recent revelation, noted, “The group released satellite photographs of what it said was the site. But the images did not appear to constitute hard evidence to support the assertion that it was a planned nuclear facility.” Clearly, a non-state actor like the MEK doesn’t have satellites of its own floating around in space taking pictures of Iranian mountains; it’s obviously getting the information from government organizations with advanced spying resources.

Though these latest claims by the MEK have garnered quite a bit of attention this week, they are, in fact, nothing new.  Allegations about tunnel systems have long been a go-to source of alarmism over Iran’s nuclear program. Back in January 2010, on the heels of promoting an opinion piece that explicitly advocated an unprovoked military attack on Iran, The New York Times‘ William Broad published a hysterical report, which claimed, “Over the past decade, Iran has quietly hidden an increasingly large part of its atomic complex in networks of tunnels and bunkers across the country.”

The report goes on to lament that Iranian efforts to protect their own nuclear infrastructure from military attack is viewed by the U.S. administration as “a stealth weapon, complicating the West’s military and geopolitical calculus.” Translation: it’s harder to spy on things and then blow them up when they’re not out in the open and that’s annoying.

Broad doesn’t even try to mask the frustration:

“It complicates your targeting,” said Richard L. Russell, a former Central Intelligence Agency analyst now at the National Defense University. “We’re used to facilities being above ground. Underground, it becomes literally a black hole. You can’t be sure what’s taking place.”

Even the Israelis concede that solid rock can render bombs useless. Late last month, the Israeli defense minister, Ehud Barak, told Parliament that the Qum plant was “located in bunkers that cannot be destroyed through a conventional attack.”

Despite the decades of threats from the United States and Israel, then-U.S. Defense Secretary Robert Gates didn’t realize the blistering irony when, discussing the heavily-fortified uranium enrichment site at Fordow, he said, “If they wanted it for peaceful purposes, there’s no reason to put it so deep underground, no reason to be deceptive about it, keep it a secret for a protracted period of time.”

Later in his report, Broad describes Iranian President Mahmoud Ahmadinejad as a tunnel aficionado and quotes Greg Duckworth, a “civilian scientist” described as having “recently led a Pentagon research effort to pinpoint enemy tunnels,” as saying, “Deeply buried targets have been a problem forever. And it’s getting worse.”

As the January 2010 report continues, a familiar name emerges under the heading “An Opposition Watchdog.” Who could that be? Broad writes, “In 2002, the National Council of Resistance of Iran, an opposition group, revealed that Iran was building a secret underground nuclear plant at Natanz that turned out to be for enriching uranium. Enrichment plants can make fuel for reactors or, with a little more effort, atom bombs.”

He goes on to sing the praises of NCRI for having announced “that Iran was digging tunnels for missile and atomic work at 14 sites” in 2005 and announcing “that Iran was tunneling in the mountains near Natanz, the sprawling enrichment site” in 2007, which he says was confirmed by satellite images.

In December 2009, Broad writes that NCRI issued yet another report on “Iranian military tunneling,” which claimed “Iran had dug tunnels and bunkers for research facilities, ammunition storage, military headquarters and command and control centers.”

“A group of factories” in the mountains east of Tehran, it insisted without providing proof, specialize in “the manufacturing of nuclear warheads.”

Broad even quotes the Los Alamos National Laboratory’s Frank Pabian saying of the MEK, “They’re right 90 percent of the time. That doesn’t mean they’re perfect, but 90 percent is a pretty good record.” Mohamed ElBaradei, former IAEA Director-General, had a different take on the group. “We followed whatever they came up with. And a lot of it was bogus.”

In his reporting, William Broad never once identifies the MEK or NCRI as an officially designated terrorist group, which at the time they both were and had been for over a decade.

To hammer home how deliberately alarmist the claims actually were, the Times even published the article with a photograph of a smiling Mahmoud Ahmadinejad and his entourage in red hardhats emerging from what is apparently supposed to resemble a steel-reinforced underground lair. Yet the photo is wholly unrelated to any of the allegations made within the report.

The caption beneath of the picture reads, “President Mahmoud Ahmadinejad of Iran, center, at a highway tunnel near Tehran. Much of Iran’s atomic work is also in tunnels.”

The focus on Iranian tunnels leads inevitably to discussion of American military capabilities and the challenges faced by less vulnerable facilities. Broad, in his 2010 report, noted that the “Pentagon is racing to develop a deadly tunnel weapon” for such circumstances. That weapon has since been completed and tested, but has not been sold to Israel for fear it might be used without American authorization.

Clearly, the MEK’s latest revelations are recycled claims and, like before, are essentially allegations based on vague intelligence leaked to the group by American officials. The MEK merely acts as a laundering service for the unproven accusations of its handlers in the United States and Israel.

Unfortunately, the mainstream press – even when skeptical about the information – continues to dutifully provide a platform for such propaganda and fear-mongering by publishing such accusations.