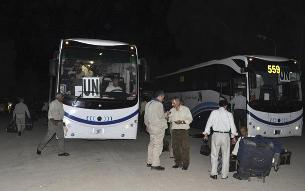 The killing of dozens of members of an Iranian dissident group that the Iraqi government wants out of the country should be ‘‘a wake-up call’’ to the international community, the acting U.N. envoy to Iraq said Friday as he pressed countries to do more to find them homes abroad.

Members of the Mujahedeen-e-Khalq, which is strongly opposed to Iran’s clerical regime, were welcomed into Iraq by Saddam Hussein in the 1980s during the brutal war with neighboring Iran.

Their fortunes turned sharply with the Iraqi dictator’s toppling in the 2003 U.S.-led invasion. Iraq’s current Shiite-led Iraqi government, which has strengthened ties with Tehran, considers their presence in the country illegal.

A disputed Sept. 1 shooting at their longtime home in Camp Ashraf killed 52 MEK members — roughly half of the camp’s remaining population.

The dissidents accuse Iraqi security forces of carrying out the killings. Baghdad denies involvement, with officials saying an internal dispute was to blame. It has promised to carry out an investigation.

United Nations representatives traveled to the camp a day after the killing. Although the U.N. has not determined who was responsible, acting U.N. envoy Gyorgy Busztin said the bloodshed highlights the need to protect the residents.

‘‘What has happened at Camp Ashraf on the first of September is a game changer. It should be a wake-up call to all countries who are in a position to help to come forward,’’ he told The Associated Press. ‘‘Resettlement is the ultimate guarantee of their security.’’

The U.N. this week helped facilitate the transfer of the last 42 Camp Ashraf residents to a different camp near Baghdad airport where more than 2,800 of their comrades are staying. That compound is meant to provide temporary shelter while the U.N. works to resettle them abroad.

Busztin said the Baghdad camp, a former U.S. military base known as Camp Liberty, should offer them better security than Camp Ashraf, which is 95 kilometers (60 miles) northeast of Baghdad. It is also physically closer to U.N. offices in the Iraqi capital, making it easier to monitor, he said.

The MEK carried out a series of bombings and assassinations inside Iran in the 1980s and fought alongside Iraqi forces in the 1980-88 Iran-Iraq war. It says it renounced violence in 2001.

The U.S. considered the MEK a terrorist group until last year. Leaving Camp Ashraf was a key factor in reversing that designation.

The Baghdad camp where MEK members are now all staying has itself been hit by deadly rocket attacks claimed by Iranian-backed Shiite militants.

‘‘These are human beings. Whatever the government of Iraq says about their past, these are people in need of protection, and we take that very seriously,’’ Busztin said.

The resettlement process has moved slowly because the U.N. is struggling to find countries willing to take them. U.N. officials also say that many residents have been uncooperative with the process, complicating the relocation effort.

A total of 210 residents have left to other countries so far, according to figures provided by the U.N. refugee agency.

Most of them went to Albania, which has offered to take 210 in total. Germany has said it would accept about 100. A small number of residents have been resettled elsewhere.

Seven former Camp Ashraf members are unaccounted for following this month’s violence, according to the MEK. The group claims they are being held by Iraqi forces and will soon be turned over to Iran against their will.

Iraqi Human Rights Minister Mohammed Shiyaa al-Sudani and Georges Bakoos, who oversees the MEK issue for the Iraqi government, both denied Friday that the seven said to be missing are in Iraqi custody.

Busztin, the U.N. official, had no information on their whereabouts.

The U.N. refugee agency expressed concern for the seven reported missing, saying in a statement that they are all known to be asylum-seekers. It called on the Iraqi government to find them and ensure their safety, as well as prevent them from being returned to Iran against their will.

As for the rest of the exiles, Busztin said it is difficult to say how soon they could be resettled.

‘‘I’m optimistic more countries will come forward and the numbers in the camps will be gradually reduced. But for the length of the process, I cannot give you a reasonable estimate,’’ he said. ‘‘What we request from the government of Iraq is to extend them adequate protection until the last one leaves,’’ he added.