lawmakers, however, will press him on a very different issue: the recent killings of dozens of members of a former terrorist group that the Iraqi government had promised — and failed — to protect.

The Mujahedeen-e Khalq, or MEK, is the most powerful lobby you’ve never heard of, and probably the most unusual. It has used a combination of political savvy and seemingly bottomless pools of money to persuade many prominent lawmakers and former officials from the Bush and Obama administrations that it has broad support within Iran and could help turn the country into a democracy. Along the way, it’s gone from being as seen as a group responsible for the deaths of at least six Americans to one that is a vital partner in the effort to overthrow Iran’s theocratic regime.

MEK supporters like New Jersey Democrat Bob Menendez, the powerful chairman of the Senate Foreign Relations Committee, say they want to punish the Maliki government for an attack on an MEK compound called Camp Ashraf last month that left that killed at least 50 of its members. During an October 3rd hearing, Menendez told Wendy Sherman, the number three official at the State Department, that he would suspend U.S. weapons sales to Iraq until more was done to protect the MEK members at the base.

Vice President Biden discussed the MEK issue when he spoke with Maliki Wednesday morning, according to a senior administration official. The official said Baghdad wanted the MEK to leave Iraq, but said the U.S. government had no credible information that the Iraqi government was involved in the September attack on Camp Ashraf. Still, the official said that Washington worried that the group’s roughly 2,900 members would be in danger until they could be moved to new homes in other countries. The problem, he said, was that Albania and Germany were the only nations that have so far been willing to take in even small numbers of MEK followers.

Menendez aides say the senator, for his part, plans to specifically raise the Iraqi government’s treatment of the MEK members, along with his concern that Baghdad is allowing Iran to use its airspace to fly weapons and fighters to Syria, when he sits down with Maliki later Wednesday.

“It is unacceptable to lose one more life when American commanders gave these individuals a written guarantee toward their safety and it sends a message to others in the world that when we say that we are going to do that and we do not, that they should not trust us,” he said at the time. “I doubt very much that we are going to see any approval of any weapons sales to Iraq until we get this situation in a place in which people’s lives are saved.”

MEK advocates like Rendell receive up to $30,000 per speech, which means many have been paid hundreds of thousands of dollars by the group. Rendell, in an interview, said he genuinely believed in the group’s cause and wasn’t in it for the money. He said that he and MEK advocates like Jones and former FBI Director Louis Freeh have spent hundreds of hours personally lobbying the State Department and members of Congress on behalf of the group and had done so pro bono. Rendell said he bills $1,000 per hour as a lawyer, which meant that had foregone significant amounts of money to aid the group.

“The U.S. had promised to guarantee their safety and then just stood aside when they were massacred, gangster style,” he said in the interview. “It’s disgusting.”

Rendell helped draft a letter to Obama last week that demanded U.S. assistance for the MEK members still stuck at Camp Ashraf. In the letter, obtained by FP, MEK’s advocates said the killings at Camp Ashraf was a “premeditated mass murder planned at the highest level and executed by Iraqi forces and agents, using equipment and training provided by U.S. forces.”

“We urge you to allow all of the Camp Liberty residents to be evacuated immediately from Iraq, using United States forces, and brought to safety in a United States Government supported facility,” the letter read. Until that happened, the group argued, the Obama administration should “suspend any aid or sale of arms to Iraq.”

For the moment, that’s not a step the White House is prepared to take. Bernadette Meehan, a spokesperson for the National Security Council, said the administration was “deeply concerned” about the safety of the MEK members at Camp Ashraf and consistently pressed the the Iraqi government to do as much as possible to protect them. Still, she said that delaying weapons sales to Iraq could do more harm than good.

“U.S. security assistance, and foreign military sales in particular, are tools that we use for building and shaping Iraq’s defense capabilities and integrating Iraqi security forces with our security forces and regional partners,” Meehan said. “Withholding security assistance may well serve to decrease our influence in Baghdad, our ability to seed relationships, and provide leverage for strategic competitors who will fill the vacuum and could conceivably damage our long-term interests.”

Administration officials said the president would discuss a range of regional and security issues with Maliki when the Iraqi leader visits the White House Friday but declined to say whether the president planned to specifically raise the MEK issue.

Either way, the MEK’s prominent role in the U.S.-Iraqi relationship represents a remarkable turnaround for a group that was once held responsible for a string of bombings and assassinations inside Iran that killed at least six Americans, including the deputy chief of the U.S. military mission to Iran and a senior Texaco executive. It was also linked to the takeover of the U.S. embassy in Tehran. In 1997, the State Department designated the group a “foreign terrorist organization,” a move that imposed strict financial sanctions against the MEK. The MEK’s current leadership has long denied any involvement in the killings or the seizure of the embassy.

The group’s relationship with Washington improved dramatically after the U.S. invasion of Iraq. The MEK group gave up its weapons and formed a warm relationship with senior American commanders, who gave the group formal promises of protection. Last month, however, masked gunmen with military-quality weapons swept into an MEK compound outside Baghdad, killed roughly 50 of its members and abducted seven others. Grisly videos released by the MEK showed the corpses of men who were shot in the head with their hands tied behind their backs. The group’s supporters here at home immediately accused Maliki’s government of orchestrating the attack, something Baghdad denies, and called for it to be sanctioned in response.

The MEK’s power in Washington surprises many experts on the group, who describe it as a cult that exerts tremendous power over the daily lives of its followers.

Jeremiah Goulka, a former RAND researcher who has made repeated visits to Camp Ashraf, said MEK leaders physical cut their members off from the outside world, limit their access to outside newspapers or TV stations, and enforce gender segregation and celibacy. He said the MEK required its followers to attend regular sessions where they were forced to admit whether they had sexual thoughts. Those that admitted to them were publicly humiliated, while those that denied having them were derided as liars and criticized anyway.

“That’s the definition of how a cult works,” he said.

Karim Sadjadpour, an Iran expert at the Carnegie Endowment for International Peace, said the group had little support back home because ordinary Iranians were nationalists troubled by both the MEK’s vaguely socialist ideology and its past relationship with Saddam Hussein, which funded the group’s operations for decades. Many outside experts believe the MEK is still drawing from the pools of money it received from the former Iraqi leader.

“What keeps them in the news are their deep pockets,” Sadjadpour said. “Once those deep pockets run out they’re basically going to be rendered irrelevant.” 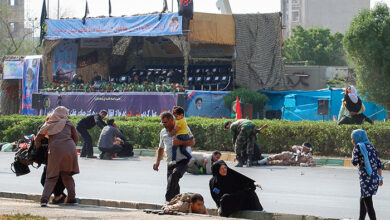 US Vows to “Overthrow” Iran as Terrorists Target Iranians