Mostafa was visiting the headquarters of the Mujahedin Khalq Organization (the MKO) in Auvers sur d’Oise, Paris when he was beaten up by some of the thugs of the group. He was violently encountered because he was asking the group leader to allow him to meet with his daughter Somayeh.  After travelling to the group’s camp in Iraq for several times, Mostafa, finally took his case to the group leader, Maryam Rajavi.    Due to severe beating Mostafa was hospitalized overnight. He was accompanied with his other daughter Hooriyeh who was also injured by the MKO agents in Auver. 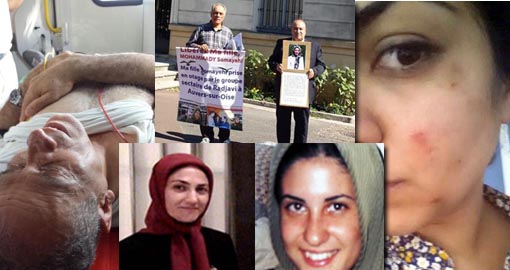 Somayeh is an example of many people captured in the cult of Rajavi (the MKO), separated from family, friends and society. “Family Survival Trust” that is a foundation formed by volunteers who are concerned for people, families, communities and societies who are abused by totalitarian cults. Some of the members of this foundation are volunteers whose children, parents, siblings, friends or colleagues were recruited by cults. Their task is very similar to ours at Nejat NGO that is specifically focused on the salvation of the victims of the MKO cult.

This article refers to Family Survival Trust as a reliable and informed source on the cults since they professionally deal with a large number of case studies being abused by different cults. FST’s website proposes, “What damaging cults have in common is their vindictive abusiveness and their dissociative totalitarianism”.

The above mentioned fact about destructive cults is definitely witnessed by a large number of members of the MKO (the Cult of Rajavi).

Ghorban Ali Hossein Nezhad is a former high-ranking member and interpreter of the group.  He also has a daughter taken as a hostage in the MKO’s Camp Liberty, Iraq. As a disassociated member, he is not allowed to meet with his daughter Zeinab by the group leaders. “Cults are dissociative, separating members from families, friends and colleagues,” FST proposes.

The horrifying events that are happening inside the cults are the main reasons that the cults’ leaders are able to keep members out of reach for a long time.   Ebrahim Khodabande, a former member of the MKO and cult expert describes how a cult victim is indoctrinated by the cult system:

“Cults have no unchangeable principal; they have only one fixed principal and that is: Everything must go around the leader’s interests and will. Maryam Rajavi told us:” You are not good enough unless you recognize Massoud’s interests and will and then you try to fulfill them”.

According to FST, Cults recruit members by various forms of enticement or deception, demanding total submission and adoption of the ideas by members. Free thinking is not allowed.

Khodabandeh’s testimony absolutely confirms the above characteristics of cults: “In cults, lying and deceiving is formulated and indoctrinated by the system. Everything is based on lie and deception. The hierarchy tells lies from top to bottom.”

He admits that he was deceived and then was recruited by the MKO. ”Then I was brainwashed under the mind-control system and I was manipulated to tell lies about the group’s cause as if it was a secular pro-western organization,” he says.

The MKO’s pro-West and pro-democracy gesture has an external function for the leaders. This way they can gain the support of western politicians, particularly Zionist warmongers of the US Congress. ”At the same time, to gain acceptance from wider society, cults lobby politicians and the public, using the same ideas of freedom of ex

In contrast with the MKO’s slogans for human rights and democracy, the Human Rights Watch report titled “No Exit” offers testimonies of numerous cases of human rights violations committed in the Cult of Rajavi. Besides, there are a lot more interviews and memoires of ex-members of the group who were victims of its cult-like structure (most of them are available at Nejat NGO website).

“Cults tend to be psychologically manipulative or abusive in order to exploit and control members commercially or sexually,” according to the FST’s description of cults. ”Some cults can also be physically abusive”. The No Exit report confirms that members of the Cult of Rajavi are mentally and physically tortured and at least in one case a man named Parvis Ahmadi was killed under torture in the group’s jail in Camp Ashraf.  Parvis’s case was approved by some other defectors of the group.

Furthermore, as FST proposes, cults are abundant and deceptive and the reason for concern is clear. “The separation from loved ones, whose personalities may become unrecognisable after cultic recruitment, causes a great deal of grief and upset to families and friends,” the website says. “Seeing changes in, or hearing of the abuse suffered by, cult victims – or sometimes having to deal with an individual’s disappearance – can cause a great deal of stress, anger and upset in the home.”

The common grief of the two fathers Hossein nezhad and Mohhammadi made them to take an action near the MKO’s headquarters in Auver Sur D’Oise, Paris. They tried to inform citizens of Auver Sur d’Oise about the violent, cult-like nature of the MKO. They distributed flyers, brochure, images and CDs to inform the citizens that the cult has kidnapped their daughters.

Khodabandeh believes that it is essential for the family of the victims to be involved in order to speed up the process of liberation. He suggests that the salvation of the MKO hostages is possible if they are supported from outside of the cult, such as the family members and other philanthropists. “That’s why the cult leaders forbid and control any contact with families,” he says. All cult victims need help, no matter how they have been involved or harmed, according to FST.