Second group of families of Liberty residents went to the camp near Baghdad, Iraq.

On Friday November 20th, another group of families of residents of Camp Liberty – taken as hostages by the Mujahedin Khalq Organization (the MKO) picketed in front of the camp in an effort to get news about their loved ones there. 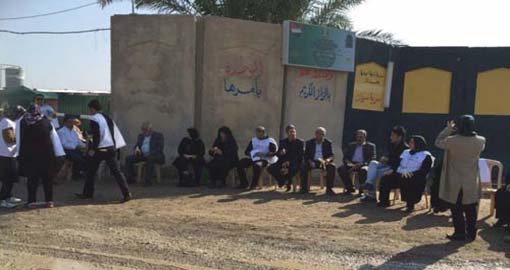 These families demand the local authorities of the UNHCR to aid them with information about their dear ones who are not allowed to visit them.

The families were from Eastern Azarbayjan, Markazi and Isfahan provinces. They stayed the previous night in a hotel in Baghdad. They were present in front of the doors of Liberty, on Friday morning at 10 O’clock.

They are determined not to leave the camp unless the UNHCR gives them proper information about the destiny of their children and unless they are able to have a short visit with them.

As well as the first time, using loudspeakers, cellphones and cameras was forbidden for the families but they tried to cry the names of the children so energetically that they could hear them. They also tried to enter the Camp but they were not allowed.

They called on all human rights activists including Europe-based defectors of the MKO to support the action taken by the families and to put pressure on the UNHCR to allow families to visit their children. The UN should answer why it is acting in line with the ambitions of the Rajavis.