As usual, when a crisis erupts among the Mojahedin Khalq in Iraq, the world and his dog are ready to jump in and use it as a platform to push their own agenda based on their own interpretation of events. 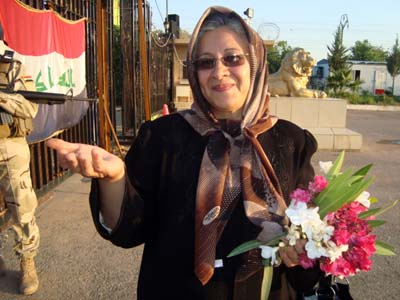 We have US lobbyists in Washington telling the UN – which is conducting an investigation on the ground – not only who perpetrated the attack but also what to do about it. We have Iran dancing with joy over the ‘elimination’ of its enemies, though more circumspectly adding that Iran itself will pursue vengeance through legal channels.

It’s easy to sit outside the country and talk. It’s easy to hold the Iraqis responsible for everything that happens in their country in disregard of the blatant interference from every side.

The long suffering government of Iraq – which is also conducting an investigation of its own – yet again reminds UNAMI and Western governments that the MEK cannot stay in their country. For thirty years the Mojahedin Khalq has been working there for the benefit of America and western interests; which paid a middleman called Massoud Rajavi for their services. The MEK consequently killed thousands of Iraqis. The country cannot now be expected to continue to play host to such a terrorist group.

But behind all the noise and squabbles of the various political bodies there echoes a profound silence. We never, ever get to hear from the people who are themselves directly involved, the MEK rank and file. Of course, on September 1st, the day of the attack on Camp Ashraf, the MEK leadership almost instantly broadcast its own ‘Hollywood Blockbuster’ version of events, with films of the assailants creeping up on the camp and graphic pictures of the aftermath; images replete with contradictions and inconsistencies.

But what of the victims, those survivors and injured who have now been taken to Camp Liberty? What of the people already in Camp Liberty? We never get to hear how they feel, nor about whether they are worried about being the next targets, nor about how they want their futures to unfold.

For American politicians and lobbyists these individuals are only pawns in a political game which they propose to win at all costs. For the Iranians and the Iraqis these are terrorists who do not deserve a voice. More importantly, as UNAMI officials can confirm, the people in Camp Liberty are being held incommunicado by the leaders of the cult. And as long as the MEK plays its valuable role as a brand on which to hang an advertising campaign then nobody is looking for a solution.

However, America has a moral duty toward these individuals who have done so much for them. America also has an international obligation to the government of a sovereign Iraq after ‘liberating’ the country from former American ally Saddam Hussein and killing hundreds of thousands of Iraqis in the process. America must put pressure on the MEK leaders to finally get out of Iraq, to open up the camp and allow the residents to leave as individuals and not as members of a terrorist group. This of course simply requires quiet, dignified co-operation with the UN and Iraqi officials who are there to oversee and facilitate exactly this occurrence. Even the MEK’s own Iranian supporters in the west are begging the leaders for such co-operation.

Once it is acknowledged that the residents of Camp Liberty are individuals and not pawns to be deployed or destroyed, and the MEK leaders are required to restore their basic freedoms, then solutions as to what can be done with them will not be difficult to find. First and foremost of these is to reunite them with their families. The 52 people who died in Camp Ashraf all had families. The remainder who have been transferred to Camp Liberty all have families, as do all the other residents there. Since 2003 many of these families have sought contact with their loved ones and been denied by the MEK leadership who are afraid of the compassionate influence their presence exerts over their loved ones. In 2009 a determined group of families set up a permanent picket outside Camp Ashraf resulting in the decision of several MEK to leave the camp and return to civilian life; this gradual process of attrition continues at Camp Liberty. Observers on the ground are in no doubt that had families still been permitted to remain there as a normalising presence, then the events of September 1st would not, could not have occurred.

When looking for a permanent solution for the residents, anybody with any sincerity must acknowledge that the involvement of these people’s families can offer the emotional, financial and mental security needed for them to return to normal life wherever they finally settle. Beyond this, the normalising presence of families at Camp Liberty will forestall the opportunity for further attacks.