It is time to reboot Hands Off the People of Iran, argues Yassamine Mather

Iran in his sights?

You would have thought that the peoples of the Middle East, who have suffered so much this millennium under the Bush and Obama administrations, might be spared more destruction and devastation, but unfortunately 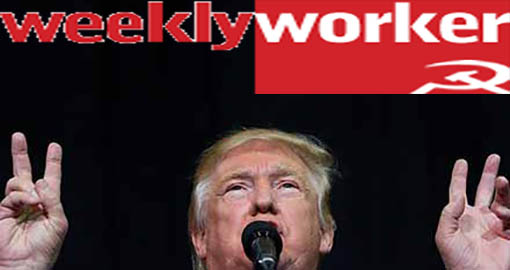 things do not look good. With the new Trump administration it is very likely that, in addition to the existing war zones – Syria, Iraq, Yemen, Bahrain … – we will see new areas of conflict and new attempts at regime change from above.

Millions of civilians throughout the Middle East, but especially in Iran, are wary of the dangers ahead, and anxious about the close relationship between the US president and the Israeli prime minister. A number of events in the last few weeks have given rise to this anxiety.

A week before Trump’s inauguration, two of his closest allies – former New York mayor Rudy Giuliani and former US representative to UN John Bolton – joined two dozen ex-officials in signing a letter to Trump urging him to start talks with the Iranian opposition group, Mujahedin-e Khalq (MEK), and its front organisation, the National Council of Resistance.

For those who do not know much about the MEK, let me assure you it is one of the most discredited exile groups – nowadays more a religious cult, with practices similar to the Moonies (in recent years we have seen enforced mass divorce, enforced mass remarriage, worship of the married couple who are the cult’s leaders, a switch from supporting Saddam Hussein to becoming paid lackeys of Saudi Arabia …). The very fact that these close allies of Donald Trump could envisage such talks is proof once more that the US has learnt nothing from the Iraq war or attempts at regime change in Syria. If there is one way of making sure the Islamic rulers of Iran stay in power in Tehran, it would be to start a dialogue with the Mujahedin as a possible replacement. The Iranian people hate the MEK and their lunatic practices so much, one can envisage Iran’s rulers hoping the Giuliani-Bolton letter succeeds in its aim.

After this came Trump’s comments two days before his inauguration: the US should have seized Iraq’s oil in 2003. Now, anyone with even limited knowledge of the matter knows there were good reasons why Bush did not contemplate such lunacy. Had the administration done so, it would have been violating decades of international practice, including the Geneva conventions. But maybe we should not expect anything else from the man who supports waterboarding prisoners of war.

So, if the signs were ominous before the inauguration, what has happened since is even more worrying.

On January 21, Binyamin Netanyahu sent a ‘message to the Iranian people’. The Jerusalem Post published the entire text of Netanyahu’s letter, including the following:

I hope this message reaches every Iranian – young and old, religious and secular, man and woman …

I know you’d prefer to live without fear. I know you’d want to be able to speak freely, to love who you want without the fear of being tortured or hung from a crane. I know you’d like to surf the web freely and not have to see videos like this one using a virtual private network to circumvent censorship …

By calling daily for Israel’s destruction, the regime hopes to instil hostility between us. This is wrong. We are your friend, not your enemy. We’ve always distinguished between the Iranian people and the Iranian regime.

Both in Tehran and throughout the Middle East the message was interpreted as a threat – an attempt to justify imminent plans for air attacks, now that the restraints imposed by the Obama administration on the more adventurous policies of the Zionist regime have been lifted. This message was followed by a phone conversation with the US president, where by all accounts the Iran nuclear deal was discussed.

The Israeli premier will be amongst the first world leaders to visit Washington and the Iranian people are justifiably worried about what the combination of neoconservative, pro-MEK advisors and Trump’s pro-Zionist stance will bring for the region.

Iran’s rulers have mixed feeling about the new administration. On the one hand, they are happy he is not a fan of Saudi Arabia and Trump’s comments about Russia have received positive coverage in Tehran. On the other hand, with allies and advisors such as Giuliani and Bolton, it is likely that Trump would not act to stop an Israeli attack on Iran, even if his declared priority is to defeat Iran’s main enemies in the region, Islamic State and Al Nusra.

As for the reformist faction of the Iranian regime, it is concerned about the impact of Trump’s presidency on the nuclear agreement signed last year. Trump has said on many occasions that he considers this to be “one of the worst deals ever made”. The more conservative factions of the regime, just like the ‘regime change from above’ opposition groups, are hoping Trump will tear it up.

With all the controversy over the new president’s racist, sexist and anti-gay remarks, amongst other things, sections of pro-west Iranian opposition in exile have been forced to change their tune. For most of the last two or three decades they have told us that Iran’s rulers were backward because they had failed to promote anti-sexist, pro-LGBT policies. But now those rulers are no longer the only misogynists in town. No doubt the supreme leader, ayatollah Ali Khamenei, approved of one of Trump’s first initiatives – taking down references to LGBT equality from the White House website on his first day as president.

And by January 23 Trump was trying to outdo Khamenei on abortion. He signed an executive order blocking foreign aid and federal budget funding for international non-governmental organisations that provide or “promote” abortions. The new vice-president, Mike Pence, is of like mind: he facilitated the passage of several laws restricting abortions, when he was governor of Indiana.

As I write, Trump is expected to announce restrictions on US entry for citizens of seven predominantly Muslim countries, including Iran. Unlike the Israeli premier, Trump is not after winning hearts and minds in Iran (or elsewhere in the Middle East), yet he has fans amongst deluded sections of the Iranian opposition, including the MEK, who are convinced that sooner rather than later he will go for a full-scale military attack on Iran, or else give Netanyahu the nod to knock out its military and nuclear installations (while the US concentrates on ‘fighting al Qa’eda’ in Iraq and Syria!). Both scenarios are clearly frightening, yet in these uncertain times they cannot be ruled out.

All this coincides with a time when Iran’s rulers are facing considerable internal opposition from the working class. Strikes and protests in and around some the country’s major industrial sites are occurring daily, while retired teachers and civil servants, whose real income is falling daily because of inflation and the fall in the value of the Iranian currency, have organised demonstrations. While Iranians are using every opportunity to protest, the left is not only weak and divided, but have mostly lost all credibility – having, for example, accepted funds from US neoconservatives. Many former leftwing groups are now nothing more than single-issue campaigns (for women’s or LGBT rights, supporting Kurdish or Arab nationalism …), because it was easier to get funding from the west that way. Gradually that funding affected their politics. It was no longer fashionable to talk of imperialism and capitalism. Now they were against ‘backward Islamists’ and for ‘progress’.

Many such groups have had a hard time of it after the nuclear deal and so they were hoping a Clinton presidency would revive their fortunes. Unfortunately for them, it looks like under Trump their financial situation will not improve.

In the absence of a principled organised left, the voice of the Iranian working class – a class whose struggles continue, day in, day out, a class destined to play a significant role in the struggles ahead – is not being heard. Outside Iran we are not in a position to do much, but we must become the voice of our own class in Iran, theworking class. We must publicise the struggles against the Islamic government and its corrupt, capitalist backers, while remaining vigilant about the danger of new imperialist wars and aggression in the region.

That is why we will need to reboot Hands Off the People of Iran.