Former members of the Mujahedin Khalq Organization (the MKO, MEK, the Cult of Rajavi, and PMOI) called for the trial of the group leaders, for crimes against humanity. 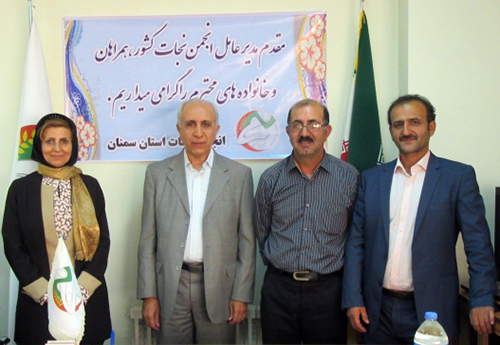 Five former members of the MKO met in the office of Nejat Society in Semnan where they signed a petition to bring Massoud and Maryam Rajavi to justice in a fair international court for their crimes against humanity including themselves and other members of the Cult of Rajavi.

They asked the authorities of the HCR and the Albanian government to facilitate the visit of the cult members and their families and to help them choose for their life in a free world.

Regarding the relocation of the group members in Albania, the defectors warned about the more oppressing atmosphere that rules the group’s base in Tirana compared with Camp Liberty, Iraq.

The following is their final appeal:

As former members of the Cult of Rajavi, we lost the best years of life in the cult under the absolute power of Rajavi. We witnessed the pains and mental pressure of the cult authorities over the members.

Despite their pro-democracy and human rights slogans, Massoud Rajavi and his wife ruined our life. We were deprived of the most basic rights of human beings in the MKO.  Those who were married were forced to divorce, they have not been allowed to see their loved ones for years.

Dissident members of the group were threatened, imprisoned and eventually tortured. In some cases they were killed in a secret way.

We did not have any access to mass media. We were not permitted to contact our family although we were willing to. Certain members were allowed to contact their families for the group’s favor including raising contributions or to recruit them — these cases were not known to ordinary members.

This organization with its terrorist background and the crimes it commits against human beings is hated by public opinion. It was also designated as a terrorist group by the US government and the EU. The group aided Saddam Hussein in suppressing the uprising of Iraqi Kurds and Shiites in 1991. Massoud Rajavi manipulated out comrades in order to commit suicide.

Therefore, we ask the authorities of the international human rights bodies and the Albanian government to bring Massoud and Maryam Rajavi to justice.  We expect that our friends in the MKO’s bases in Tirana will be able to have their least right which is choosing their place of living, and will manage to contact their families without the intervention of the cult authorities. They should be given the chance to enjoy a free life the same as we do.