An organization fighting for the collapse of the current form of government in Iran called the NCRI (National Council of Resistance of Iran) has publicly called on the Albanian government to expel from Albania two Iranian diplomats accredited in Tirana. The NCRI demands that the Albanian government expel the First Secretary of the Iranian Embassy in Tirana, Mostafa Roodaki and Cultural Attaché, Seyed Ahmad Hosseini Alast. This request is based on the April 1997 EU Resolution on the expulsion of Iranian spies accredited under diplomatic cover. 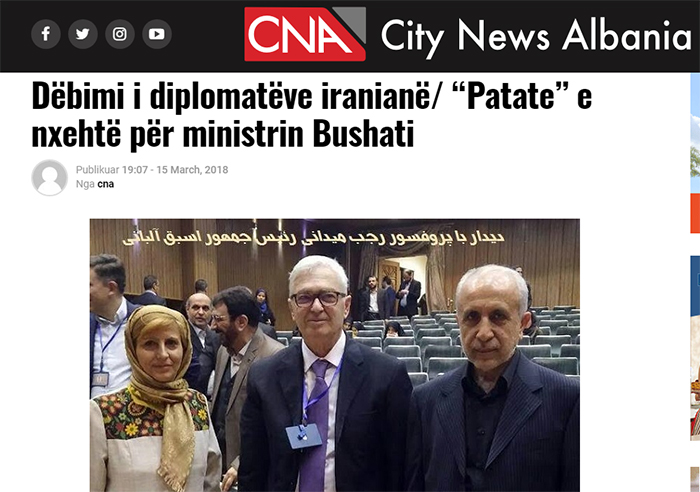 According to the NCRI, the two diplomats are simply spies of the Iranian secret service called VAJA. Despite the fact that the NCRI errs about the functions attributed to one of the aforementioned persons, this call is extremely problematic for the Albanian government, especially Minister Bushati and Xhafa, who according to Albanian law has the authority to designate a foreign diplomat accredited in Tirana persona non-grata. It should be noted that, according to the official Diplomatic List of the Ministry for Europe and Foreign Affairs, the First Secretary at the Iranian Embassy in Tirana is Mr. Fereeydon Zandi.

A demand from a fugitive Iranian fugitive organization should not be taken seriously by the Albanian authorities, but when this organization has ‘heavyweight minders’ in the international arena, such a call can be extremely problematic!

On March 5-6, a scientific symposium on the work of our national poet Naim Frashëri was held at Modares University in Tehran. The symposium, along with scientific authorities from the Republic of Kosovo, FYROM and Bosnia, was also attended by prominent Albanian personalities such as Dr. Prof. Rexhep Meidani, former President of the Republic of Albania, Academician Floresha Dado, Dr. Arian Leka lecturer at the Academy of Arts etc. The NCRI alleges that organisations such Habilian or Didban Centre act as instruments of the Iranian VAJA and used this symposium to influence Albanian VIPs against the Mojahedin (MEK) organization housed in Camp Ashraf Three in Manza near Durrës.

In this context, it remains to be seen how Bushati and Xhafa will react to this request for the expulsion of Iranian diplomats, as well as the request from Nejat Association, which appealed to the Albanian authorities to provide visas and enable the families of Mojahedin members to travel from Iran to Albania and meet with their loved ones living in Manza.

To add a little humour in our writing, we can confirm without fear or favour that former Prime Minister Pandeli Majko will eat ice crea in the Gelato La Pasticceria at the Golestan Shopping Centre in Tehran after the Mojahedin of Makkah take over Iran, and at the same time, former President Rexhep Meidani will drink coffee at the ‘Lamiz’ cafe in Tajrish Square in Tehran after Iran’s current government destroys the Mojahedin’s military camp at Manza. The British boast of their humour, but indeed, English humour is far inferior to the humour of Albanian politicians!!!!! / GJERGJ THANASI /CNA.al