With the relocation of the Mujahedin Khalq Organization (the MKO/ MEK/ PMOI/ the Cult of Rajavi) in Albania Europe, concerns over the presence of a formerly terrorist designated group with cult-like attitudes has been increasing. From time to time, News outlets, TV channels shed light upon the matter of the MKO.
The most recent reference to the case of the MKO was posted on the Swiss newspaper New Zurich Zeitung. The author of the article Ulrich von Schwerin investigates the support by the side of US leading politicians for the MKO despite the fact that

“the history of the Iranian People’s Mujahedeen is bloody, turbulent and tragic, their method is controversial and their ideology is full of contradictions”. [1]

He finds the American support for the group as a contradiction too because it is the most hated opposition group among Iranian public.

“No Iranian opposition group polarizes like them, no one has so many critics, but no such prominent supporters,” he states. The contradiction leads him to wonder what role the MKO plays in Washington’s Iran policy is, and if it really is the right ally for the US government. [2]

To find out the answer, the author interviews or cites from several Western politicians, scholars and journalists including German Green MP Omid Nouripour.

“The People’s Mujahedeen have suffered an incredible amount of suffering, but also caused a lot of damage,” Nouripour says. He strongly advised against supporting the group because there are “huge questions about its ideology, its structure and its legitimacy” and because of its past it has little support in Iran. [3]

Thus, the author of NZZ concludes,

“For many, their commitment to democracy and human rights seems untrustworthy after alliance with Saddam Hussein. And even the pronounced leadership cult around the Rajavis makes many doubt on their democratic views.” [4]

Ulrich von Schwerin closes his article citing Daniel Benjamin of the New York Times who sees MKO’s multi-million dollar campaign to buy US politicians’ support as the main motivation for advocating the formerly terrorist designated group that has the blood of six US citizens in hand.

Besides NZZ, there has been a post on the controversial presence of the MKO in Italian news website “Gli Occhi Della Guerra” based in Rome in the early January. The writer, Giovanni Giacalone focuses on the expulsion of the two Iranian diplomats by the Albanian government based on a false flag operation plotted by the Israeli Intelligence Mossad and the MKO.

“Apparently, the clash between the Shiite axis and the Salafite/Wahhabi galaxy, as well as between Israel and Iran, is now also taking place on Albanian soil and the MEK may play a major role in this scenario,” Giacalone suggests. “However, the Mojahedin base on the Adriatic threatens to increase destabilization in the Balkans, an area already characterized by strong ethnic-religious and political tensions, all to the detriment of Europe. Albania for its part is reconfirmed as among the most loyal allies of the United States and Israel.” [6]

The threat of the MKO is persistently confirmed by the Albanian-Canadian historian Dr. Olsi Jazexhi who was interviewed by the Balkan Post, last week. Albania is deriving no benefit but only headaches, scandals and bad name for what it is doing with MEK,” Dr Jazexhi tells Navid Nasr of the Balkan Post.

“The media in the Balkans and the region, from Serbia, to Greece, Macedonia and Italy, have reported with great concern the coming of MEK to Albania. Europeans are also upset with what Albania is doing.” [7]

He believes that the only people who are benefiting from hosting the MEK are organized criminals and some Albanian politicians who run gangs of drug dealers.

he says.
He points out the destructive role of the MKO in the international relations particularly in the Europe considering the MKO as destructive as other Jihadist extremists like ISIS.

“The European Union, the Council of Europe and the Organization for Security and Cooperation in Europe, which are not happy with what Albania is doing, must be asked to raise their voice against the MEK’s activities,”

“These three organizations must extend their deradicalization programs over to the MEK and must not use their programs only against Albanian Muslims who want to do Jihad in Syria.”
“EU bodies must ask Albania and the Americans to come out with an action plan to deradicalize MEK in the same way that they are jailing and deradicalizing ISIS sympathizers. France must do the same,” he continues. “They must not allow Maryam Rajavi to use French soil as a base for violent Jihadi propaganda against Iran or any other country. The Europeans must ask MEK to open its camp, deradicalize its members, stop its Jihadi propaganda and its members must be allowed to marry, find jobs and start free civilian lives.”

Europe Capitalizes on the Iran Deal

Europe Capitalizes on the Iran Deal 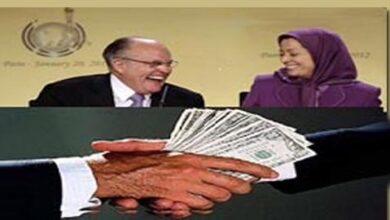 Islamic Terrorism Has an Advocate in the Oval Office