According to an investigation carried out by El País, the Moujahideens of the People made a contribution of 800 000 euro to fund the electoral campaign of the Andalusian party, Vox, in the 2004 European Elections [1]. 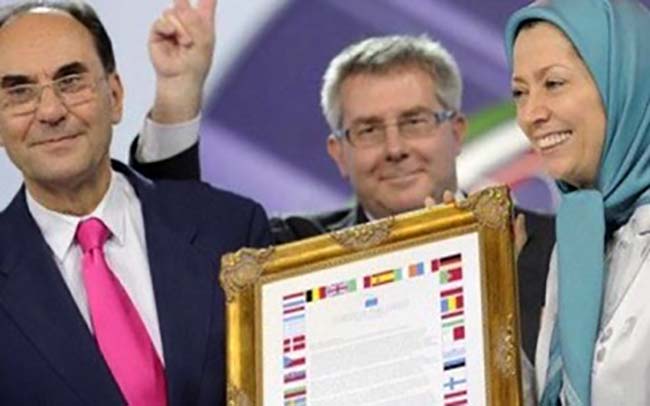 The Socialist daily newspaper established the subsidiary used to transfer the money but it has not managed to shed light on its signification.

The Moujahideens of the People started out as an Iranian Marxist organization established at the end of the dictatorship of Shah Reza Pahlevi. Over time, it became a sect working on behalf of Israel and the United States against the anti-imperialist regime of the Islamic Revolutionaries.
The Founder of the Sect was Massoud Rajavi. He flees to France after organizing a bloody massacre of the Islamic government on 28 June 1981. He obtains the protection of President François Mitterrand (who secretly bombed Iran) before being expelled by Prime Minister Jacques Chirac. The sect then took refuge in Iraq (at the height of the war that President Saddam Hussein waged against Iran). It executes dirty tricks for the Hussein administration, taking on tasks that the Presidential Guard refuses. When the United States topples President Saddam Hussein, the CIA reluctantly recycles it. The sect develops a niche for attacks against civilians in Iran and participates in a campaign to assassinate Iranian scientists.
Finally in 2013, Albania accepts establishing a city near Tirana for 3 to 4 000 members of this sect. Today this city used as the base for carrying out cyber-attack actions against Iranian interests. According to the local press, the Albanian police does not have access to this camp where some members of the sect live as slaves.
It is likely that the investment of the Moujahideens of the People form part of the backdrop of Israel’s investment in European political parties classed as “the Extreme Right”. What happened was that the Moujahideens stopped directing their vengeance against the Jew, targeting the Muslim instead.
It was Alejo Vidal-Quadras (to the left in the photo) who established Vox in 2013. In 2009, he went as a European MP to Camp Ashraf (Iraq), camp of the Moujahideens of the People. At this time, Maryam Radjavi (right in the photo) was President of the Moujahideens. Alejo participated in at least 10 of the Sect’s Annual gatherings at Villepinte (France). At one time he was found on the side of the former Socialist Prime Minister José Luis Rodríguez Zapatero. More recently he has stood beside Rudy Giuliani and John Bolton.
According to El País, the transfer of money was organized by Alejo Vidal-Quadras when he was President of Vox. Alejo resigned following his failure in the 2014 European Elections. He had briefed his successor Santiago Abascal about it. It is not established that this funding continued after this.