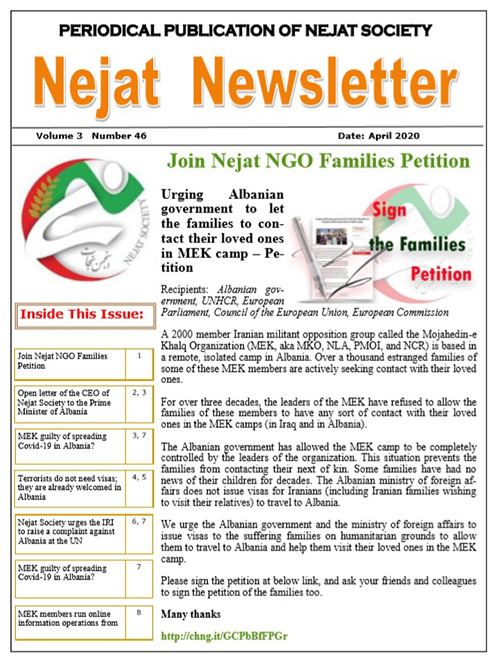 You are aware that the members of this organization are billeted in a camp in Manëz in Durrës County, western Albania. The camp is completely controlled by the organization’s leader – Albanian officials have no authority over it. The MEK organization is run as a destructive mind control cult …
One week ago, a petition was created for the families, addressing the Albanian government, and by the time I write this letter to you, more than 800 of them have signed it. Link below:
http://chng.it/GCPbBfFPGr

– MEK guilty of spreading Covid-19 in Albania?
This situation is worsened with the knowledge that there are more than three thousand members of the Mojahedin-e Khalq (MEK) in Tirana. Most of these MEK members are all considered to be administrative retirees, but are confined to work in the MEK’s terrorist camp. Many elderly men and women are spending their senior years behind computer systems in the MEK camp, using media accounts on social networks, to
Terrorists do not need visas; they are already welcomed in Albania
This has, of course, alarmed the MEK since like all other destructive mind control cults, the
leaders are scared to death of the families of the cult’s members. They know that familial emotions will counter their brainwashing practices on the members. A few days after the campaign

– Nejat Society urges the IRI to raise a complaint against Albania at the UN
On behalf of the families I request the Islamic Republic of Iran, the Ministry of Foreign Affairs, and the Supreme National Security Council note the situation of Enforced Disappearance of their loved ones in Albania and launch a lawsuit to complain to the responsible UN Committee against Albania according to the relevant international regulations which that country has signed up for.

– MEK guilty of spreading Covid-19 in Albania?
Many MEK members are over 60, because the organization wanted total dedication to the cause, which its leaders expected to be quickly successful, and therefore discouraged them from marrying and having children, which would have distracted them from their illegal and immoral goals. This has made the Mojahedin camp like an isolated nursing home, and in many countries it is nursing homes where the virus has hit the hardest.