– Gholamali Mirzai managed to return to his son and wife in Iran after three decades.
Gholamali Mirzai had been a POW in Iraq and managed to escape the MEK after he went to Albania. Mirzai gave interviews to the BBC, Al Jazeera, The New York Times and others, explaining how the POWs were handed over from Saddam to Rajavi and forced to work against their country.

– The latest deaths the MEK faces in Albania 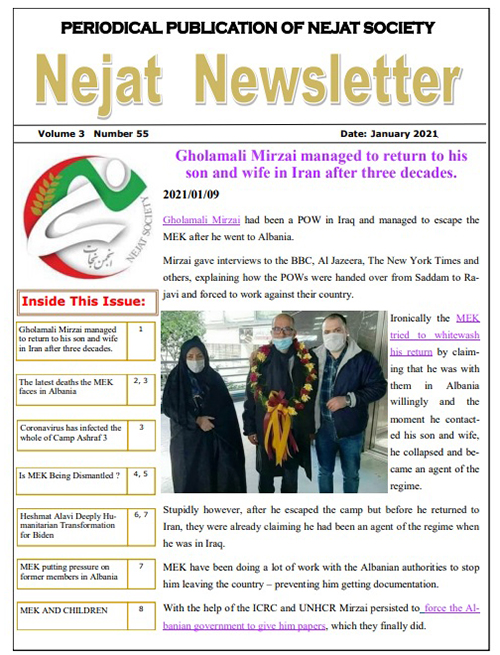 MEK is flooded with deaths but these deaths are not recorded or transmitted by Albanian authorities. MEK is burying their dead in villages of Tirana, Durres, probably inside their camp and now they are trying to set a new graveyard in the town of Manza, in Durres.

– Coronavirus has infected the whole of Camp Ashraf
Instead of using quarantine to control the spread, Maryam Rajavi and a few of her inner circle quarantined themselves to keep safe. She and the few members who don’t have the virus are quarantined and have limited contact with a few safe layers outside.

– Is MEK Being Dismantled ?
The Rajavi cult based in Camp Ashraf 3 in Manez is experiencing a crisis situation, which could possibly lead to the dissolution of this former terrorist organization. Mass infection with Covid-19 among cult members is causing relentless casualties, greatly undermining the morale of the members.

– MEK putting pressure on former members in Albania
Outside the camp, MEK are putting pressure on some members who don’t want to live with MEK but are getting paid to stay on the sidelines as supporters. MEK has agreed with the Americans, Albanians and UNHCR to be responsible to pay for their members.

– MEK AND CHILDREN
Nejat Society has published several articles describing the situation of the children of MEK members who suffered various abuses. In 1990 the Rajavis separated children from their parents who had already been forced to divorce the previous year. The children were dispersed, mostly to….

Ms. Akhlaqi Azadpour expressed concern over the health of his son in the MEK camp