Ebrahim Khodabandeh, CEO of Nejat Society, Iran, wrote a letter to the European Commissioner for Home Affairs, Ylva Johansson, calling on her to raise with the Albanian authorities the issue of abuse of the most basic human rights of members and former members of the Mojahedin-e Khalq Organization (MEK, MKO) in Albania. 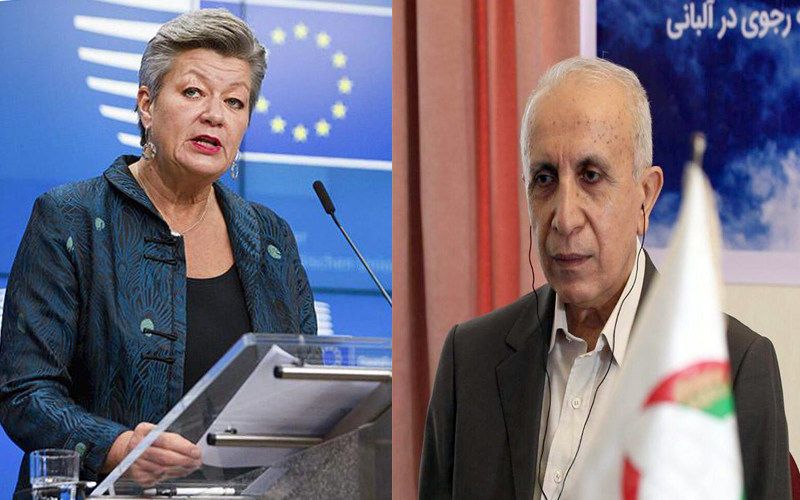 Greetings and kind regards,
I was informed that you are going to Albania today for a two-day visit and that you are meeting with high-ranking Albanian officials about the country’s entry into the European Union. Visiting the Greek border with Albania is also included in your schedule.

On behalf of the suffering families of members of the Mojahedin-e Khalq Organization (MEK, MKO) in Albania, I would like to inform you that this organization, which is run as a destructive mind control cult led by Massoud and Maryam Rajavi, was transferred to Albania in 2016 and the members are held in a remote and isolated camp in Manzë, in Durrës county, western Albania.

Members of the Rajavi cult do not have the right to communicate with their families due to the cultic internal relations, and some of their elderly mothers and fathers have been kept unaware of the situation of their loved ones in the MEK for decades. Not only have they not been allowed any meetings and have not heard their children’s voices, but they have not even received any message from them.

Last year, a petition to the Albanian government was organized by these families at Change.org – which was signed in a matter of weeks by more than 11,250 relatives, friends and acquaintances of the residents in the MEK camp in Albania – calling for the possibility of getting in touch with them and learning about their health and welfare.

Hundreds of separate letters have been sent by families to various Albanian government officials, including Prime Minister Edi Rama, but no response has been received. At the request of the MEK leaders, the Albanian government does not grant visas to Iranian nationals to visit the country, so they cannot pursue their demands on the spot through the judiciary there.

Some MEK members have now left the cult but are under severe financial pressure because they are not supported by the Albanian government or the UN High Commissioner for Refugees, and do not have identity documents, work permits or refugee status. The Rajavi Cult’s goal, in cooperation with the Albanian government, is to force them to follow the MEK’s demands. The leaders of the organization also threatened to kill these individuals and the Albanian citizens and journalists who helped them, and have waged psychological warfare against them, and in some cases created legal problems for them.

With the outbreak of the Covid-19 virus pandemic, families have become increasingly concerned about their children’s welfare. Dozens of members of the organization have reportedly died from the disease in recent weeks. Communal living and the lack of access by health officials to the camp have created dangerous conditions for the members.

Albanian public opinion, especially among the residents of Manzë and Durrës, is very concerned about the presence of a terrorist organization in their territory; a group which has been expelled from Iraq for activities that contravened national security there, and which now has an open hand to operate in their country. Many media outlets and human rights activists in Albania have warned of the presence of this terrorist cult, which violates even the most basic rights of its own members.

During this period, suspicious killings took place inside the MEK camp, including the death of Malek Shara’i, but unfortunately the local police were kept from pursuing their investigations. There is also information that the MEK is involved in organized crime in Albania, including money laundering and human trafficking, as well as weapons and drugs smuggling.

Two years ago, Mostafa Mohammadi and his wife, Canadian citizens, went to Tirana to visit their daughter, Somayeh Mohammadi, who is in the MEK camp. They were beaten by elements of the Rajavi cult, and unfortunately not only were their complaints not dealt with, but they were expelled from the country and could not return and pursue the matter through the judiciary.

When visiting the Greek border with Albania, please keep in mind that Ehsan Bidi, a former member of the MEK, was taken to the Greek border without any charges after a year of illegal detention for refusing to cooperate with the organization. He was rescued with the help of other former members, human rights activists and lawyers. He is being held in illegal detention again.

The cases of Ehsan Bidi and Mostafa Mohammadi and Malek Shara’i and dozens of other cases and the suspicious murders that were left uninvestigated show, above all, the corruption of the police, the judiciary and even the media, that Albania is now a safe haven for criminals. And now terrorists have arrived on European soil.

I urge you, as a European Union official, to ask the Albanian government and authorities in your meetings what their response is to the families of the members of the MEK in Albania. Why should the MEK be able to cut off its members from the outside world, especially their families? Why do they not have the right to leave the camp, the right to marry and start a family, and the right to a personal and individual life?