Mrs. Shadram letter to The Ambassador of Germany in Sweden

Honorable Ambassador of Germany in Sweden 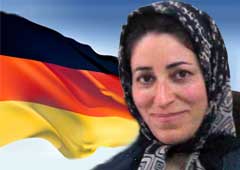 With regards, I wish to inform you that the Mojahedin-e Khalq Organization (MKO) has released news concerning the trip of Mrs. Maryam Rajavi to Germany in its entire media system.

You surely are aware that the MKO is in the list of terrorist groups in the United States, Canada and the European Union for murdering the people of Iran as well as the people of Iraq. Mrs. Maryam Rajavi also has a legal file open in France for conducting terrorism and organizing crimes as well and fraud and money laundry.

My question is that how such person who is leading a terrorist destructive cult is allowed to freely travel to your democratic country.

I must emphasize that I am a former member of the MKO who is now objecting to supporting a terrorist leader.

My name is Sho’le Shadrm. I am 42 years old, and I am living in Sweden now for 14 years. I unfortunately lost 7 years of my life with the MKO in Iraq. As soon as I criticized the organization and tried to question the cult leader Massoud Rajavi and his wife Maryam, I was subject to all sorts of insults and assaults and I was put under sever mental pressure and I even was jailed. You can imagine that what sort of a place an Iraqi jail under Saddam Hussein can be. I was condemned by the MKO like many others who had criticized the leadership, and we were handed over to the Iraqi security officers to suffer our lives. They hoped that by doing so we would regret and plead for mercy and go back to the MKO again. But most of us resisted against difficulties and I finally managed to come to Sweden. I am now living with my Swedish husband and our four children. But I must point out that I still suffer from the reminiscences of the days I spent with the cult in Iraq.

Wouldn’t it be appropriate if Mrs. Maryam Rajavi is asked about all the miseries that hundreds of individuals like me had to experience just because they wanted to leave the MKO? For what reason the most basic human rights was deprived of me and many others like me? I suggest you read the report released by the Human Rights Watch on May 2005. You would realize for yourself that how the most preliminary human rights was systematically abused inside the MKO. In this report cases such as solitary confinements, torture, and even murdering the opponents and critics have clearly been mentioned.

Regardless of all political affairs which could perhaps be the main reason for the German support of the MKO and the Rajavis, shouldn’t some attention be paid to the systematic violation of human rights within this organization? Wouldn’t be better if the German parliamentarians asked Mrs. Rajavi about the harsh situation of the children of the members and castrating the women? Shouldn’t she be asked about compulsory divorces, abandoning the children, mind manipulation of the members, and rejecting family members inside the organization? Could political interests be an excuse to close eyes on violation of human rights?

I am anxiously looking forward to receiving a reply from you

The Minister of Foreign Affairs of Germany

The Minister of Foreign Affairs of Sweden

The Speaker of the German Parliament

German members of the European Parliament