Disgusting show on the MKO television

As you may well know a large number of families of seized members of the Mojahedin-e Khalq Organization (MKO – Rajavi cult) in Ashraf garrison, the base of MKO in Iraq, are picketing in front of the main gate of the garrison for over six months and demanding the visit of their loved ones. But the leaders of the cult refuse to fulfill this demand for unjustified excuses. 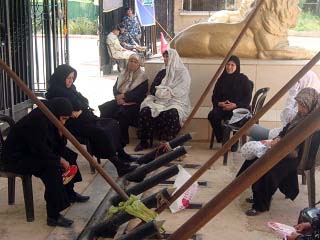 Today (Friday 6 Aug 2010) at 1400 Baghdad time, the satellite television of the Rajavi cult showed two of its victims called Barat-Ali Rigi and Sa’id Sohrabi-Nezhad forced to insult their own families in front of the camera. These two shattered victims under severe psychological and physical pressures imposed by the Rajavi cult were made to call their own families “vile clown” and name the action of their suffering families as “circus of animal”.

What the two mentioned seized victims have been dictated to say and they of course had rehearsed it several times was totally irrelevant to the case of the families. They said that since the resistance (alias for the Rajavi cult) is gaining victories every day and the Iranian regime is badly terrified, then they have forced the families to go to Iraq and try to see their relatives and sit in front of the gate of Ahsraf garrison for six months in intolerable conditions. The Rajavi cult has claimed through these two victims that the protests inside Iran and the sanctions imposed on the country has put the Iranian regime in the corner and hence they have put their pressure on the Ashraf garrison and have arranged the conspiracy of the families.

These allegations have been raised many times by the leaders and the elements of the cult and their excuse for not letting the members go out of Ashraf for a few hours to meet their relatives is that, as they say, the families who have come from far away round the world are agents of the Iranian ministry of intelligence. While the truth is that the MKO is in a very tight situation in Iraq and is so afraid of the mind manipulated members visiting their relatives since they see it equivalent to their emotions being roused and the effects of brainwashing fade away and consequently they leave the cult. This is what the Rajavi cult is terrified of and the rest is excuses and playing games.

But if one can assume that the cult is honest we come with a suggestion to counter the conspiracy of the families who, as said by these two members, have been sitting in front of Ashraf garrison in depressing conditions for six months. The best way is that these two who have been chosen for the television show and others who are all supposedly more intellectual and more intelligent comparing to their families spend a few hours and step outside Ashraf garrison and brief their families and persuade them to join the cult. Or even better make a trip to Baghdad and talk in front of Iraqi and foreign reporters and repeat the same words and answer their questions. But no doubt the leaders of the cult would never allow such things to happen and the reason is known to everyone.

But Massoud Rajavi must know that these disgusting television shows and forcing individuals to insult and accuse their own families would never solve any problem for him. When the families see these filthy tricks they become more certain that their relatives are victims of a cult and they become more assured that their loved ones must be saved. The truth is that the Rajavi cult in Iraq is stuck in a deadly trouble and this is why the leaders are afraid of even old parents of their followers and of course this is the auto-dynamic answer of history to those who wrongly think that end could justify means.

Families of the MEK hostages denied of their rightsFamily in the Mujahedin-e KhalqPersonal Rights of Members in the MEKRajavis and Cult LeadershipThe MEK; the Hypocrites
FacebookTwitterPinterestEmail
previous post

MKO Remains in US Blacklist

Letter of Ms. Abdullahi to the US Secretary of States