Mr. Mehrdad Amiri and Mr. Hojat Rafiee residents of Camp Ashraf escaped the cult on Saturday October2, 2010 at 2 O’clock am.
Mr. Mehrdad amiri, 35, and Mr. Hojat Rafiee, 42 were captured in Camp Ashraf of MKO for more than ten years. They told the families that they decided to runaway although they were seriously terrified by MKO leaders of being arrested by Iraqi forces or Iranian Intelligence." the situation created by the Camp leaders is terribly chocking so members are under too much mental pressure. The women in the group are frightened of being raped so they fear to escape more than their male comrades," they said. 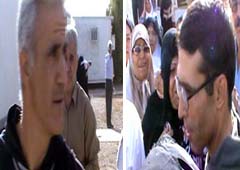 Britain aids Washington-backed MKO terrorists instead of fighting it