MKO, June 20, anniversary of collapse of a dream

June is the month of significant dates in Mujahedin Khalq Organization’s history. The most important one is June 20th, 1981 when MKO’s coup d’état against Islamic Republic failed. According to MKO’s propaganda June 20 signifies the day the group declared armed struggle 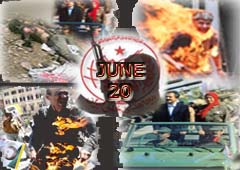 Fighting for power after the Islamic Revolution led some of opposition movements to resort to violence instead of using peaceful and civil opposition. In June 1981,Rajavi instigated a number of dedicated teenagers and youth to launch an armed uprising against the newly established Islamic government which was in its bad days at war with Iraq. The so-called uprising ended with the arrest, death and execution of a large number of youth and eventually the failure of Rajavi’s promised victory.

Since then, armed struggle was declared as MKO’s strategy to fight against IR and a wave of assassination of Iranian authorities started. MKO was supposed to overthrow the Islamic Republic in a short time after that date, according to Massoud Rajavi.

Rajavi’s dream didn’t come true and today thirty years after declaration of armed struggle Rajavi is disappeared and his organization is stuck in a cul-de-sac because it has to renounce violence in order to get removed from the list of foreign terrorist organizations of US State Department.

June 20, actually signifies the start of MKO’s political isolation because their armed act against their own people while they were under the protection of their enemy Saddam Hussein was condemned as a treason by Iranians.

Despite the disastrous failure of June 1981, Rajavi the leader of MKO Cult of personality never admitted the failure. His totalitarian doctrine never let members question about of what really happened on June 20th 1981. Questioning that day is a taboo.

Disaster of June was the consequence of Rajavi’s mistaken analysis of Iranian political and social conditions.

The dark history of MKO remembers another disastrous treason. Chehel Cheragh was a joint Operation of MKO and Iraqi army headed by Massoud and Maryam Rajavi. In the operation which also took place in June 1988 was supposed to reach Mehran (a city in the West of Iran) and then Tehran, as Rajavi had promised. He couldn’t keep his promise!

Rajavi didn’t confess his previous mistakes but he repeated them again when he launched his Eternal Light Operation across Iranian border in 1987 and led another large number of members to death.

June signifies another dishonorable date in MKO’s history too. Following the arrest of Maryam Rajavi by French Police in her base in the Parisian suburb Auver Sur d’Oise MKO leaders made members commit suicide as an act of complaint. Some members of the group set themselves on fire in European cities. Their act resulted in several disabilities and two deaths. For instance, a 17 year old Iranian-Canadian girl, Neda Hassani burned herself alive in front of French embassy in London on June 23th, 2003.

Regarding that June is the symbol of tragedy in MKO history, you may wonder why MKO celebrates June 20th anniversary every year and calls the date as the start of resistance against Islamic regime although they claim that they have renounced violence since June 2001 when they launched a mortar attack at President Khatami’s office in Tehran.

It’s been thirty years now that MKO’s propaganda campaign uses this date as an occasion to wear a mask of democracy and misleadingly represent itself as the Iranian’s voice.

Once more MKO propaganda is calling for a gathering in Paris on June 18. The so-called international gathering is attended by Afghans, Kurds, Turkish refugees who are eager to have a shelter and warm food for free for a day. They are also paid by MKO from 30 to 50 Euros for their presence at MKO event, having fun waving MKO flag.

The bankrupt MKO leaders also hire some retired politicians to speak at the event and advocate the group’s cause which allegedly is bringing democracy and freedom and human rights in Iran although June itself is the symbol of violation of human rights and cult-like practices!

MKO celebrates the start of its treasonous armed struggle meanwhile it renounces violence and armed strategy. What should we believe? How can they conceal their infamous past? This is the dilemma MKO has been plunged into for at least the last twenty years.

The crucial point here is that MKO’s existence has been blended with violence and cult-like human rights abuse and their claim for renouncing violence can never be true.