Iraq has experienced countless religiously or politically motivated attacks since Saddam Hussein was toppled in 2003. The country has witnessed numerous bloody days. The United Nations Assistance Mission for Iraq (UNAMI) says that more than 5,200 people were killed between April and the end of September this year. The escalating violence caused Iraq to be an insecure region for the residents. The Mujahedin Khalq members as unwanted guests are no exception. 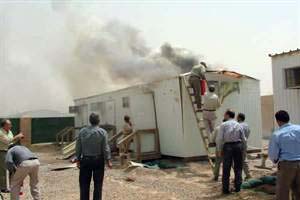 Camp Liberty, the temporary transit location of Mujahedin Khalq was hit by rockets on Thursday December 26, with three people dead and several others seriously injured, Reuters cited the camp’s spokesperson as saying.
This is the fourth rocket attack this year against the camp where 3000 members of Mujahedin reside.
Mujahedin Khalq is the Iraqi dictator’s accomplice in suppressing Shiite and Kurds uprisings who after the fall of Saddam continued its provocative practices. The Iraqi people have deep seated hatred towards the MKO since their hands stained with the blood of their countrymen and beloved ones. Iraqi authorities have issued 148 arrest warrants for MEK members for crimes against Iraqis since 1991 but none have been arrested, according to officials.
Reuters reports that Wathiq al-Batat, the commander of the al-Mukhtar Army militia, took responsibility for the attack on the MKO camp accusing the group of communicating with Sunni and Shi’ite politicians he said were linked to al Qaeda.Al-Batat said :” “We’ve asked (the government) to expel them from the country many times, but they are still here,”
So the Iraqi soil is no more safe for the Mujahedin members.
After the attack on Camp Liberty EU, US, UN and some other International bodies condemned the attack in strong terms as it claimed the lives of Camp residents and urged the Iraqi government to step up security measures around the Camp and called on Iraq to launch investigation into the incident.
The Iraqi authorities have repeatedly reiterated that they have problem in providing security for their own people let alone for the members of an unwanted terrorist organization.
This process has been the case after each attack on both Camps Ashraf and Liberty, bearing no fruit.
Every time Iraq reiterates its unwillingness to let MKO stay on their soil, International bodies’ duty seems to be just condemning the attacks. The cult leaders on their turn try to take advantage of the incidents and shedding of members’ bloods.
The leaders and high ranking members of the organization who are residing in safe places  do not  care about the safety and well being of the rank and file members being trapped in the cul de sac of Iraq.
The Cult leaders won’t put into danger their cultic structure by letting members out individually, rather they want to relocate members as a unit. They strive to survive their cult by putting its members under missiles and bullets. The power-thirsty leaders of the group just look at the members as tools to promote their ambitions.
Still the only voiceless victims of the incidents are Camp residents who are both ignored by international society as well as their own leaders. Liberty residents are the plaything of political equations between their leaders and the leaders’ masters .
Really, who is to be blamed and who is to be making accountable for the lives of the 3000+ trapped residents of the Temporary Transit Location ?!
A. Sepinoud