One sure sign of someone being involved in a cult is that there is a clear separation from family and friends. This sign is clearly observed in the Cult of Rajavi (The Mujahedin khalq Organization/ the MKO). There are numerous cases of families of the group members residing in Camp Liberty Iraq who have been striving to visit their loved ones in the camp but they are absolutely barred by the authorities to do so and they are labeled the group authorities who forbid any kind of family relationship, label the families as “agents of the regime’s intelligence Ministry under the cover of families of the residents”.  However, the 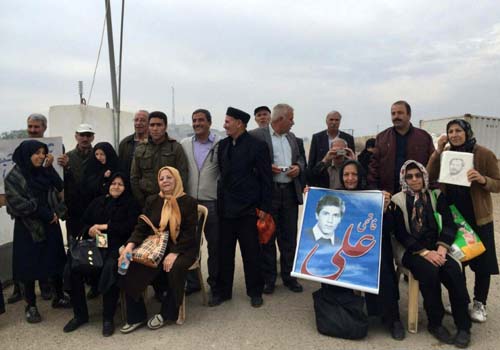 efforts of the suffering families picketing in front of Camp Liberty resulted favorably by the Iraqi Parliament.

Following the meeting between Liberty residents’ families and certain Iraqi MPs, a parliamentary committee was formed to investigate the situation of the MKO members and their families’ request to visit their loved ones in the camp. They are hoping that the Iraqi administration will take proper actions to facilitate their visit. The parliament website reported that a member of the parliament’s leadership board, Dr. Humam Hamoudi had recommended the Human Rights Commission and Foreign Relations Commission to form a delegation to visit Camp Liberty in order to get first-hand information about the situation in the camp. This will help them to transfer the family’s wishes to their loved ones about their desires to visit them in the camp.

On the other side of the battle, the MKO’s propaganda does not remain silent. It publishes a so-called letter of families of liberty residents to the UN Secretary General Ban Ki Moon. In the alleged letter, the alleged “liberty residents’ families residing in Europe and the United States” are “gravely concerned” about the lives of their children!

The so-called letter is a failed tactic because of the numerous evidences on violation of the rights of family in the MKO camps. Regardless of the grieves of a large number of families from Iran who have been endeavoring to visit their beloveds in Camp Ashraf and Camp Liberty, the truths on the family rights abuse inside the MKO is undeniable.

Despite the MKO propaganda calls for visa for families in Europe and the US, there are families who were granted visa to travel to Iraq but they were prevented from visiting their loved ones in the Camps. Mustafa and Mahboubeh Mohammadi, whose daughter Somayeh has been taken as hostage by the MKO leaders, went to Camp Ashraf Iraq several times. They were not allowed to visit their daughter and even they were beaten by the MKO agents. However, the Mohammadis did not stop their efforts to save their daughter from the cult bars of the MKO.

Mustafa Mohammadi together with his other daughter Hurieh even went to the MKO’s headquarters in Auver sur d’oise to urge the group leaders to release their long lost daughter. Once more, they were attacked by the group agents for seeking their most basic right, the right to have a free contact with their loved one. Mostafa and Hurrieh were accompanied by another heartbroken father, Ghorban Ali Hosseinnezhad. When Gorban Ali escaped Camp Ashraf his daughter was left behind in the camp.

According to his testimonies, when he was in the camp he was not allowed to visit his daughter regularly. “The leaders of the MKO cult did not allow me and my first daughter Zeinab, 34, to visit and talk to each other while we were both in the same camp,” said Hosseinnezhad. “We were just allowed to meet each other on the New Year’s celebration for an hour or two and under their direct control and supervision.”

In Hurriyeh Mohammadi’s report on their trip to Auver sur D’oise you can read: “The Mojahedin are threatened by a father and daughter that have put their lives on hold many times and have used the little resources they have to fly to Paris to ask for the safety of Somayeh. They call themselves an organization for the liberation of the people of Iran yet they cannot even provide freedom to the ones they call their own. We will not stop fighting for the safety of our children and this will not be over until these captives are freed.”

As usual, the MKO propaganda labels the two fathers as agents of the Iranian Intelligence but there are many more evidences on the cases of violation against families in the group. Forced divorces and separation of children from parents are two iconic examples of abuses took place in the MKO after the so-called ideological revolution of Massoud Rajavi. Human Rights Watch and the US Defence Department’s RAND report, both mentioned the fact.

In Persian references you can see testimonies of former members who reveal horrible evidences about child abuses committed in the MKO camps. Manijeh Habashi and Nadereh Afshari, Batoul Soltani and many others are female defectors of the Cult of Rajavi who recount horrific facts about distorted family relations in the MKO camps. Before the children were dispatched to Europe in 1991, mothers in Ashraf were not permitted to live with their children. They were just allowed to visit their children on certain days of the week or certain hours of the day.

The above mentioned cases of violation of family rights occur in the camps of the MKO where no visa is needed to travel to visit a family member and the distance between two family members is not more than a few kilometer.

In a letter to UNHCR, former members of the MKO including Ghorban Ali Hosseinnejad ask the authorities to provide residents of Camp liberty with a situation so that they can decide for their future with their free will. “Many of us have been in this organization, before being able to find a way out of it, for decades”, they state.” We are fully aware of the brainwashing and intimidation activities that take place at every level with the single aim of isolating the members from the outside world and feeding them false information and targeted propaganda to turn them against their own families.”

The signatories of the letter believe that family connections –that the MKO members have been deprived of for many years—are a key to release them mentally and eventually physically. “Based on our personal experience, we assure you that if you facilitate the meeting of the members with their families in a protected and private space, without the presence of their superiors, they will find the courage to express their true desire that is to join their families and relocate from Iraq,” they write.

While the MKO propaganda claims that Iraqi government does not grant visas to families of liberty residents, this is the call of families who repeatedly went to Iraq, stand behind the gates of Ashraf and Liberty but they were not granted “visa” to visit their loves ones who are taken as hostages behind the bars of the camp:

“We will go to any lengths and are begging anyone who can hear our voices to help us. Please help free our kids from their evil clutches. Help their voices be heard. Help mothers take their children back into their arms. Help children see the advancement of the world and live the rest of their lives not in fear but tranquility and peace.