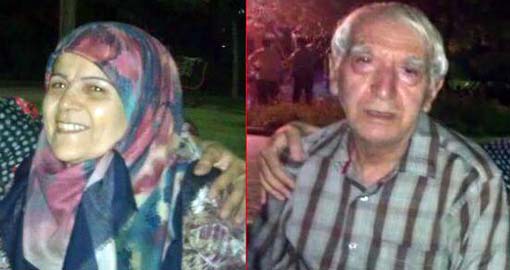 Respectfully, I would like to introduce myself, Abbas Fanoudi, as the father of Zahra Fanoudi who has been caught by MEK together with her husband, Mohammad Reza Hussein Nejad, in 2001; she has been jailed at Camp Ashraf since then. They were deprived of contacting or making any phone call to her family, and now her husband is transferred to Albany. They were kept away from each other since then without even being able to hear about each other. My daughter is currently at Camp Liberty, and we do not have any news of her health condition. The heads of the organization do not allow

us to meet our daughter and have always frightened her by deception and intimidation. I, as a father, have been away from and unaware of my daughter’s condition. However, due to the declining health and the old age of my wife and I, we are impatiently awaiting the slightest news about her health or meeting her wheresoever away from dictatorial atmosphere of the organization.

I, hereby, beg to ask you and all competent authorities and officials to give due consideration to my request and also to thousands of other families’ letters to provide us with an opportunity to meet our children. Although many such letters and demands are sent to human rights bodies so far, neither any response nor any action has happened. I am not in the position to remind you of your duty as a responsible authority for thousands of families waiting to hear about their children and also against a terrorist group. Concerning the current chaotic condition in Iraq, the lack of security in the region, the recent bombing of Camp Liberty, and also the risks threatening our children’s lives, we fiercely demand the end of their stay in that country and their freedom from deception and dictatorship of the notorious People’s Mojahedin Organization (MEK).

I beg you to read this letter through the eyes of old parents missing their child, and take positive measures to take out our worries.

Many thanks and regards,

– Special Representative of the Secretary-General of the United Nation