During efforts to collect material for an investigative letter for a construction permit issued by the National Territorial Council for the ‘Iranian Mojahedin Khalq’ group known as the MEK, but officially granted to an NGO named FARA, (an extremely problematic issue for Albania and Albanians), we came across in the US media “Huffington Post” an article titled “Albania’s Modern Slavery Problem Alienates Europe” written by British national Anne Singleton (Khodabandeh). The article deals in detail with the problem of Iranian MEKs sheltered in the outskirts of Tirana. Item link: https://www.huffingtonpost.com/entry/albanians-modern-slavery-problem-alienates-europe_us_5a12eefae4b0e6450602ecfd 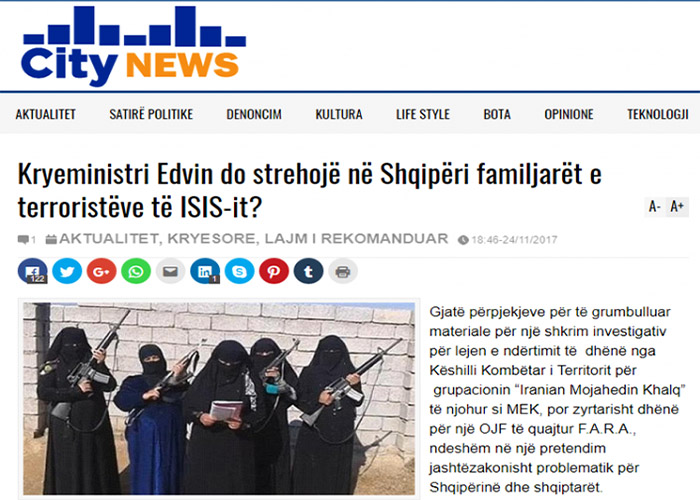 The article drew attention to a very problematic phrase: “The other [reason] is to empty the old university buildings in Tirana to make way for a new round of political slaves to take up residence. This time, families of Daesh fighters who have fled Iraq and Syria are rumoured to be ready to move to Albania on ‘humanitarian grounds’.”

According to the author of the article, Anne Singleton, the buildings of a private university in the suburbs of Tirana closed by the Rama government will be used instead of the Iranians some relocated members of the families of Daesh fighters (ISIS) who have fled from Iraq and Syria. This move will be for “humanitarian reasons”.

It is true that Albania as an ally of America accepted the US request to shelter no more than 10 Uighurs released from Guantanamo Prison, but many other countries from all over the world including microscopic states such as Nauru accepted such Uighurs just like Albania. It is true that the Berisha Government accepted several dozen members of the MEK in Albania, but with the clear American promise that other NATO countries would accept in their countries the rest of the MEK members who would leave Iraq. The Rama government, along with the chemical weapons cleaning deal with the Americans, in the absence of total transparency, admitted the arrival of all the MEKs in Albania.

We personally believe that the survivors of Daesh terrorists killed in the battlefields in Iraq and Syria are likely to come to Albania. There are signs that young women and children or even babies of terrorist fathers are turning into an extraordinary mess for western countries, especially the US. The Rama government is likely to be silent about hosting in Albania the families of terrorists in exchange for even half a US pledge to close an eye to the hard and soft drugs that are produced and transited through Albania, money laundry and delivery of weapons, ammunition and explosives from Albania to European countries.

The Swedes managed to repatriate to Sweden, under diplomatic pressure, an ethnic Swedish teenager who, after falling in love with a terrorist, went to the ISIS territories and had two children with the terrorist who was killed 3 years later. The German authorities are determined to transfer to Germany some ethnic German nationals who ended up in ISIS territories along with their lovers. These Germans, including children, are in the Iraqi prisons and detention centers of Shiite militias in Iraq.

From the above two examples it emerges that serious Western states are trying to evacuate women and children who are their own citizens. Understandably, no German, French, Belgian, Swedish, Luxembourg or ethnic Albanian women, along with their children, will be killed after being with men or lovers killed as members of ISIS. Here will become home to terrorists who would be killed in places where their lives are endangered, or at least they would be imprisoned and tortured. All Tunisians and Moroccans, Azeris and Turkmen, Malaysian and Malaysian, Indonesian and Nigerian Nigerians (Niger) will arrive in Albania. etc. In the best case, they will come only from such nationalities. But with Belgian, French, Spanish, Italian, English, etc. nationalities not being admitted back into those EU countries because they are a threat to national security, supposedly those who threaten the safety of major European countries do not endanger the safety of such a country as Albania!!!!

Where is the risk?

They will not stay in Albania for weeks of months, but will stay for ever! After Rama becomes the Qammah, the old Latin saying in our case can be spelled out. With belan: family of killed terrorists let the governments of Post-Rama deal!

Most of the women of Daesh’s terrorists have done at least a rudimentary training in the use of combat weapons, explosives and explosive booby-traps. If this training will add to their experience in the battlefield, then their level of combat is higher not only than the police in the Tahiri era, but comparable to the capabilities of Albanian commando combat troops. We have seen in the documentaries and the propaganda photos in “Dabiq” magazine or the media “Hayat”, even 10-year-old children are forced to execute Daesh hostages. I ask the reader how many Albanian policemen did not kill, but just shot in the flesh one single time during their police career?!?!?!? Imagine a 10 to 12-year-old child who is traumatized by killing people for ISIS, or rapists sheltering in Albania where illegal weapons are still openly available!

The hypocrisy of the Rama Government

Prime Minister Edi Rama’s government is most likely to make an agreement to shelter victims of terrorists killed by ethnicities from all four corners of the world. But this government should not shy away from concern about the fate of Albanian women [wives] and children of terrorists killed in Iraq and Syria… Valbona Berisha, with her brain stunned by ISIS’s propaganda grabbed her boy (her third child), abandoned her ordinary immigrant partner in Italy and fled to Syria. Rama’s government made ZERO effort to find this miserable kid. The Italian law enforcement authorities, Italian diplomats in Damascus, Tehran, Beirut and Baghdad did what they could to recover the infant, and the foolish and criminal father and mother who were ethnic Albanians, but also lawful immigrants in Italy. When you’re not interested in getting the miserable child from the hell of Valbona Berisha, why the hell is he worrying about the widows and children of terrorists?!!?!? Why was Julia Sergio (Fatima), the terrorist spouse of Lushari terrorist Aldo Kobuzi, sent to Italy in January 2017 with the assistance of the border police of Vlora and was not given residence in Albania, but instead they ask to bring these widows and orphans of foreign terrorists here. Julia Serxhon was a bride from Albania, and we had an Italian group, why go away in Africa and Asia to bring widows and young kids of murdered terrorists?!?!?! The most likely answer is simply that the Prime Minister’s parliamentary seat should not expire in January 2018, but some 4 years later!

There is a growing suspicion that Rama & Co. are negotiating … humanitarian shelter for the foreign families of ISIS terrorists killed in the ranks of ISIS because of the government’s “omertas”. By applying the rule of journalism to hear both sides of the issue, we addressed the question by SMS to Gjebrea, whose name is quoted in the article written by Anne Singleton. Ms. Gjebrea as the former Deputy Minister of the Interior Ministry answered us by SMS by suggesting, inter alia, that we should contact the councillor for internal affairs of the interior ministry. We contacted Bita’s Advisor by SMS on 20 November 2017. The SMS response was: “Mr. Thanasi! I receive info and write to you FLM!” An answer quite polytheistic and correct. On November 22 we again contacted Mr. Bita, because no response came from him for 2 days. We believe it enough to be informed whether there is any truth or not in the issue of transferring family members of terrorists to Albania. Until the evening of November 24, 2016, we asked but got no reply. This is typical for Mrs Rilindja for whom Rama flags up transparency over taxpayer money, but the matter of Daesh, “humanitarian” terrorists, does not!