With most respectful greetings to Mr. Edi Rama Prime Minister of Albania, 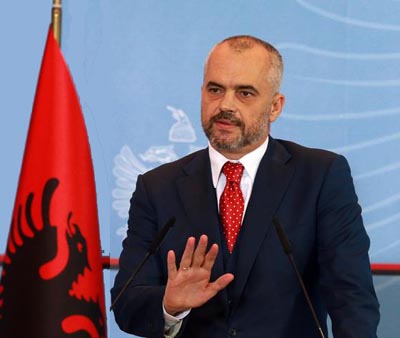 With all due respect, we would like to inform you that Iranian Pen club ( Kanon Iran Galam) consists of dissident senior ex-members of PMOI with more than 20 years of history with the PMOI whom are now Human rights activists and pursuing to save the lives of the rest of the members entangled in Camp Liberty in Iraq.

Our goal is to help the other members who have not yet been able to release themselves from the above said Cult to be able to join their family in the free world and start a new life. On this reason, we thank you and the government of Albania for your humanitarian efforts in accepting some of the members of People’s Mojahedin Organization which has removed these people away from the dangers of remaining in Iraq.

We believe that you and your government has demonstrated its commitment to human rights by taking this important step to save to lives of these unfortunate people. Unfortunately, but what we hear from Ex members of Mojahedin in Tirana is somehow disturbing. We hear that Maryam Rajavi is sending her top known agents from Paris and these agents, who are from her ‘Leadership Council’, are now trying to control the lives of the recently arrived people as they did in the Iraqi camps. Also, the Mojahedin Organization has taken advantage of this opportunity and has placed some of its commanders among the ordinary PMOI members who have been sent to Albania, in order to supervise and control them.

Once they arrive in Albania one of the first things all the new arrivals do is to contact their families and seek out other forms of support.

The refugees are given time limited support by the UN refugee agency accommodation and a small living allowance which is deemed sufficient for them to settle in their new country and make new lives for themselves.

And the MEK does not easily relinquish its control over these former members and has made every effort to prevent them from living independently. But more importantly, these new arrivals are desperate to tell their stories. They want to speak out about the suffering they endured, some for many, many years.

In this respect we would like to bring to your respectful attention the International Human’s Right Watch report in 2005. The report titled “‘No Exit’ – Human Rights Abuses inside the Mujahidin Khalq Camps Human Rights Watch, May 2005” reflects extensive violation of the human rights, although it was a drop out of the ocean. The report is based on the direct testimonies of a dozen former MKO members, including five who were turned over to Iraqi security forces and held in Abu Ghraib prison under Saddam Hussein’s government. The report details how dissident members of the shadowy Mujahidin Khalq Organization (MKO) were tortured, beaten and held in solitary confinement for years at military camps in Iraq after they criticized the group’s policies and undemocratic practices, or indicated that they planned to leave the organization. Amongst them Mr. Mohammad Hussein Sobhani a dissident member of the MKO after 20 years of activity in the Organization was jailed for eight years which was later handed over to Saddam Hussein being jailed in Abu Ghorab Prison and experiences severe tortures and psychological and physical mistreatments.

We also would like to point at the reports of Mr. Alibakhsh Afarinandeh which has recently been released from this Mujahidin Cult and published in the Pejwak website. Mr. Afarinandeh explaines his and other dissident members’ imprisonment and tortures in 1994 in great detail.

Surely, The Family of refugees and Iranian people will not forget your great and humanitarian act of harboring their children in Albania. We are prepared to hand over the names and particulars of the discontented members and those who wish to defect from the organization as well as necessary files and documents.

– Embassy of USA in Germany

– Ministers of Affairs of the EU-