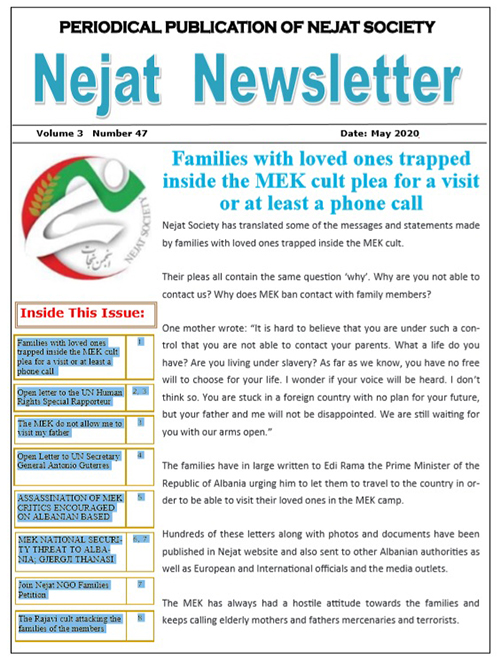 One mother wrote: “It is hard to believe that you are under such a control that you are not able to contact your parents. What a life do you have? Are you living under slavery? As far as we know, you have no free will to choose for your life…..

To begin with, Gafour Fatahian, a longtime member of the Mojahedin, was one of the best young people in the organization’s camps in Iraq for more than twenty years. Fortunately, I had been rescued and I am currently living in France…..

– The MEK do not allow me to visit my father
I am Fatemeh Ali Mirzaiee, Reza Ali Mirzaiee’s daughter from Golestan province, Iran.
My father was recruited by the Mojahedin-e Khalq Organization (MKO/ MEK) 35 years ago while he did not know anything about the group…..

I am Hamael Ghanizadeh, the elderly mother of three children who are in the Mujahedin Khalq Organization (the MKO) in Albania. My children Mehri, Nahid and Mahmoud Saadat have been mentally and physically imprisoned in the MKO for 33 years and we have not been allowed to meet or contact them (except for one time) during these past years….

– ASSASSINATION OF MEK CRITICS ENCOURAGED ON ALBANIAN BASED

MEK leaders this week used the MEK’s TV programme to officially announce that ‘the assassination of families and critics is a duty wherever possible’.In this programme Parviz Khazaei – Rajavi’s NCRI representative in Scandinavia who had been a diplomat in the Iranian embassy at the time of the Shah, and later worked for the IRI as a diplomat at start of the Revolution before joining with the MEK and who is of notoriously immoral character – sat alongside Abol Qassem Rezai – aka Mohsen Rezai, one of Maryam Rajavi’s deputies infamous for torturing dissenters in Iraq….

“After the outbreak no rank and file members are allowed to go to Tirana,
but for medical emergencies. The commanders continue to visit Tirana including the luxurious Tirana Hotel at Skanderbeg Square.”Thanasi goes on to say, “the rules, regulations and Albanian law cease to exert power at the front gate of the camp. …

– Join Nejat NGO Families Petition
For over three decades, the leaders of the MEK have refused to allow the families of these members to have any sort of contact with their loved ones in the MEK camps (in Iraq and in Albania).The Albanian government has allowed the MEK camp to be completely controlled by the leaders of the organization. This situation prevents the families from contacting their next of kin

– The Rajavi cult attacking the families of the members
This month the MEK output has been dedicated to attacking the families and their petition addressed to Albanian PM Edi Rama asking for help to contact their loved ones in the MEK camp. Many commentators have been surprised that this has been such an important issue for the MEK. Some have questioned why MEK has even wheeled out some of their veteran members like Mohammad Mohaddessin to come to their TV to talk and to answer supporters’ questions.

Please hear our cry for help