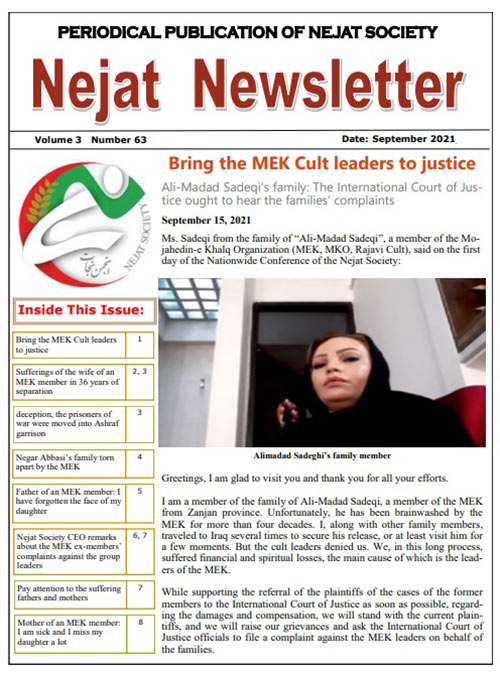 has been brainwashed by the MEK for more than four decades. I, along with other family members,traveled to Iraq several times to secure his release, or at least visit him for a few moments. But the cult leaders denied us..

– Sufferings of the wife of an MEK member in 36 years of separation
Sedigheh Abbasi had just given birth to her third child when her husband Reza was recruited by the Mujahedin Khalq Organization (MKO/ MEK/ PMOI/ Cult of Rajavi). The newlyborn baby, Fatemeh has not seen her father since she was born. Thirty-six years ago, Reza Ali Mirzai was deceived by the MEK and cut off from the outside world and in particular his family…

– By deception, the prisoners of war were moved into Ashraf garrison
We wrote to the United Nations several times so that we could meet with him. But there was no answer for us. We continue to pursue the freedom of our uncle and we will not give up our efforts and complaints. We support the complaint lodged with the International Court of Justice in The Hague…

– Negar Abbasi’s family torn apart by the MEK
Negar was only three years old when her parents left her behind in Kermanshah, Iran, to
travel to Turkey seeking for a better life. In Turkey, Negar’s parents, Tayebeh Noori and
Mozafar Abbasi were deceived by the recruiters of the Muja hedin Khalq Organization (MKO/ MEK/ PMOI/ Cult of Rajavi).Tayebeh and Mozafar were taken by the recruiters to Iraq.This was the start of a one way journey in the isolated system of the Cult of Rajavi

– Father of an MEK member: I have forgotten the face of my daughter
Shokooh had just finished high school when she traveled to Turkey in the early 1990s. She was planning to immigrate to Europe via Turkey in order to study in a European university

– Pay attention to the suffering fathers and mothers
We wanted to meet them in Albania, where we were also denied. The Rajavi Cult, which I do not know who is supporting it at the moment, does not allow us to visit our loved ones.Oppressed families and parents suffer a lot. We can tolerate more

– Mother of an MEK member: I am sick and I miss my daughter a lot
Mahin Habibi is the mother of Pravaneh Rabiee Abbasi, a member of the Mujahedin Khalq rganization (MKO/ MEK/ PMOI/ Cult of Rajavi). Parvaneh joined the MEK 28 years ago. She just contacted her other a few times in the early years of her residence in the group’s camp Ashraf, in Iraq. The contacts have been cut off since those days.

The Rajavis are terrified of a meeting between me and you