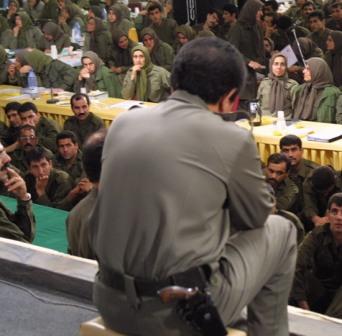 struggle. As noticed in Rajavi’s message of December 27, now after being removed from the EU terror list, Rajavi hopes its organization to be rearmed but legally this time.

In the written agreement between all MKO members and American forces, signed after the recognition of legal status of MKO members in Ashraf, all Ashraf residents denounced violence and terrorism and assured that they would never be armed illegally.

What Rajavi means by emphasizing on Ashraf residents’ refraining to be armed illegally? Who can guarantee that they will not be granted a legal or illegal opportunity to be rearmed? His statement may violate the prerequisite of the vote ruled by the EU to remove MKO from its terrorist list in which it is supposed that Mojahedin have stopped their armed struggle and terrorist activities since January 2003. His emphasis on the unlikeliness of their illegal rearming implies that their disarmament as well as bringing terrorist activities to an end was far from a voluntary act, rather it took place obligatorily due to the critical circumstances of the region. Therefore, the falsehood of the claim of the EU as well as Mojahedin that the armed struggle of Mojahedin has been replaced by the diplomatic and peaceful solution of Maryam Azdanlu is a proven fact.

Furthermore, Maryam Azdanlu as well as Masoud Rajavi insist on the restoration of their arms by the US. Also, Rajavi has repeatedly asserted that the US can count on his so-called liberation army and use Ashraf residents as a military lever in the region. He pretends that equipping Mojahedin with arms depends on the will and decision of the US. It is evident that Mojahedin have ceased their terrorist and violent activities temporarily due to the invasion of the coalition forces to Iraq as well as fall of Saddam and the trigger-happy Mojahedin have preserved their strategy of armed struggle.

His words may verify the accuracy of the decision taken by the Iraqi government on expelling Mojahedin from Iraqi soil due to their interference in its internal affairs. The fact is that the analysis of Rajavi’s statements word by word may provide Iraqi government with due motive to end the presence of Mojahedin in Iraq. In a nutshell, declaring the likelihood of the legal arming of Mojahedin in Rajavi’s message may lead to:

2. Putting the issue of Mojahedin’s asylum seeking under question,

3. Proving the falsehood of Mojahedin’s claims on stopping armed struggle and terrorist activities,

4.  Rejecting the claim of Mojahedin’s refraining to interfere in the internal affairs of Iraq,

5. Revealing the false strategic alliance of Mojahedin and Iraqi people as claimed by Rajavi.