Respectfully, we would like to acknowledge that on Saturday 28 Nowember a meeting held in Cergy supporting the cultural integration of Iranian refugees in French society was violently disrupted when twenty thugs associated with a destructive terrorist cult called Mojahedin Khalq (MKO) attacked the guests and sponsors of the meeting.One of them was Mr. Akbar Aramideh.

In this ceremony Mr. karami, Human Rights activist attached by Mr. Akbar Aramideh in this . He came from the Sweden. 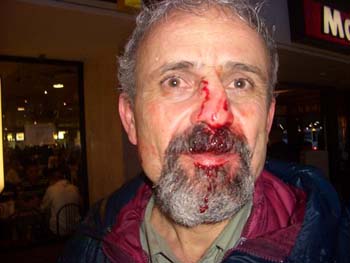 The violent attack on this public meeting was planned by Maryam Rajavi. She is planning in France ( Auvers-sur-Oise ) and conducting terrorist activities in Europe.
In this meeting three people were injured, it is only due to the prompt action of French police that further injuries were not sustained.

We would like to inform your Excellency that was Mr. Akbar Aramideh, citizeen of Sweden is supporting and backing up the leaders of MKO, MRS. MARYAM RAJAVI and MASOUD RAJAVI and their terrorist cult in France.

Mojahedin Khalq (MKO) have linked the ideology of Marx and Lenin with the Islam and established a radical organisation.

Without the expressive approval of its religious leaders, Massoud and Maryam Rahjavi, any marriage will be prohibited. The future and destiny of their members depends on their decision only.

Those who wanted to decide about their private lives themselves, have been executed by the organisation.

Also there is one undeniable fact that MKO and its National Liberation Army (NLA) have been an inseparable part of Saddam Hussein’s Regime and have even participated along the forces of the Deposed Despot to suppress the People of Iraq’s freedom movement in 1991. The Organisation is also responsible for many sabotage and terrorist activities inside Iran through the years.

In conclusion, we request from you as Ambassedor of Sweden in France that considering the local and internernational threat posed by the terrorist cult Mojahedin-e Khalq and Mr. Akbar Aramideh, member of this terrorist cult as described above. We would be pleased if you gave us the opportunity to speak to you personally.

Open letter to the Swedish parliament

MEK involvement in massacre of Kurds on record