The assertion by Iranian authorities to have arrested a number of MKO members during the Ashura riots in Tehran is an indication that the organization is so fickle in its pro-democratic claims concerning a democratic change in Iran. Regardless of what the Iranian regime’s authorities refer to as the engagement of foreign hands in the recent anti-government riots, for certain the agents that carried the operations have been those who have long announced war and armed struggle against the regime and have proved to be serious in their strategy and can never make any change to turn to peaceful and democratic ways.

It is a tactic to temporally renounce violence and terrorism to achieve certain organizational goals as MKO could easily dupe the Europeans, as it can also be regarded a bilateral cooperation and a mutually arrived agreement, to be removed from the terrorist list of the EU. The evidence mainly focused on was MKO’s claim that it had stopped its terrorist plots against the Iranian regime since 2001. At least in a number of post-election violent riots in Iran that left many casualties and deaths the organization has claimed to have played a role and the announced arrest of its members asserts their claim. Just following the bloody Ashura clashes, Maryam Rajavi told AFP in Paris that her followers were already cooperating with more recent protest movements on the streets of Tehran and called on opposition leaders to do the same.

The Iranian people have known the violent nature of MKO from the long past and know that it has a direct, or claim to have, role in aggressive and violent anti-government moves and unrests; it is either engaged in or glorifies terrorism. For sure, the world is watching and hearing. The Rajavis statements only make it much more difficult for them to be accepted by any country, none yet, as the Iraqi Government is decisive to expel them. Some believe the organization has started a new round of suicide attempt as it did in the Operation Eternal Light and attacked Iranian borders to try its chance to overthrow the regime. Of course, at the time it had the abundant military and logistical backing of Saddam when it received the heaviest military strike.

Now, again, Mrs. Rajavi has predicted that the government of Iran would fall within 12 months if foreign powers remain neutral. And of course they never intend to act directly but through all media and propaganda potentialities that foils any sense of impartiality. And the New Year has just started. Does it mean that the advocates, members and sympathizers, most in their mid and old ages, have to wait another year, as they have in the past thirty years? And of course, most of them know nothing will come out since the organization has not changed its policy of devotion to use of violence that is instead pushing the organization further onto the eagle of a precipice. Besides, the Iraqi Government does not seem to have any intention of setting another 12 months deadline to reprieve relocation of Ashraf. 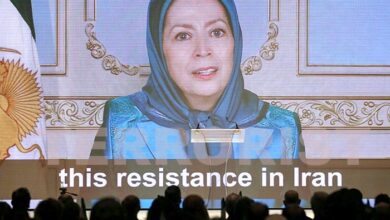 Severe punishments for not participating in MEK anniversary