Background of a Fox News Analyst 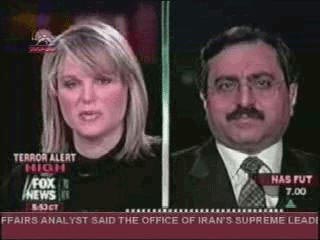 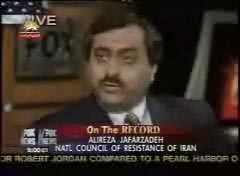 For those who have still any doubts about the issue, below is a brief biography of the notorious terrorist whom Fox News introduces as its analyst. 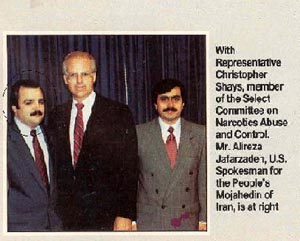 Alireza Jafarzadeh was born in Mashad (Iran) and moved to the USA before the 1979 revolution in Iran. He began there as a student of Civil Engineering. But he soon became engaged with the Mojahedin Khalq Organization (MKO) in the US. The MKO is designated by the US, UK, EU and many other countries as a terrorist entity in part because of the MKO’s affiliation with the regime of Saddam Hussein. MKO activities include the massacre of Iraqi Kurds and Marsh Arabs in March 1991 after Gulf War I, and co-operation with Iraqi Intelligence in hiding WMDs from UN weapons inspectors. Jafarzadeh worked for the MKO in several countries including Iraq. He was promoted to the position of spokesman for the MKO in the US which then gave him a position as member of the Foreign Affairs Committee of the National Council of Resistance of Iran (NCRI), the MKO’s political wing, which is also designated in the US as a terrorist entity.

Jafarzadeh quickly became a devoted member of the MKO and on the order of the organization’s Ideological (or cult) Leader, Massoud Rajavi, married Robabeh Sadeghi of Babol, Iran, after she fled her country in 1986. In 1990, Massoud Rajavi ordered all MKO members to divorce for ideological reasons. Jafarzadeh and Sadeghi, were divorced on his command.

In August 2002, an exile group known as the National Council of Resistance of Iran summoned reporters to Washington’s Willard Hotel for a morning briefing. The group’s spokesman, Alireza Jafarzadeh, charged that Iran was building two new secret nuclear facilities: a heavy-water plant near the town of Arak and a large plant to fabricate uranium fuel in the desert near the town of Natanz.

Mr. Jafarzadeh was comfortable in Washington’s power corridors, much like Ahmed Chalabi, the exiled Iraqi who provided much of the now-discredited information on Iraq’s weapons program. He was educated at the University of Michigan and the University of Texas and for years he kept a small office at the National Press Club. He has since parlayed his expertise into a slot as a paid analyst for Fox News. But the council’s military wing was on the State Department’s terrorism list for a history of political killings and ties to Saddam Hussein.

Mr. Jafarzadeh’s information tracked closely with what U.S. officials already knew. But in the summer of 2002 they had their hands full with Iraq and North Korea. When asked about the information that afternoon, a State Department spokesman offered generic criticism of Tehran’s activities, noted the council’s ties to a terrorist organization and brushed off suggestions that the dangers were comparable to those posed by Iraq.

(the rest of the article, which you should read if you subsribe to the WSJ, is a great overview of the state of play regarding Iran’s nuclear program)

“This group loves the United States. They’re assisting us in the war on terrorism; they’re pro-U.S.,” said Rep. Ileana Ros-Lehtinen (R-Fla.) in an interview with The Hill.

Middle East scholars widely dispute the assessment that the MEK is a legitimate democratic alternative to the Iranian regime. “That’s patently nonsense,” said Michael Ledeen of the American Enterprise Institute.

“I know about support on Capitol Hill for this group, and I think it’s atrocious,” said Dan Brumberg of the Carnegie Endowment for International Peace. “I think it’s due to total ignorance and political manipulation.”

He added: “There’s not much debate [about the MEK] in the academic circles of those who know Iran and Iraq.”

Elahe Hicks of Human Rights Watch said that “many, many Iranians resent” the MEK. “Because this group is so extremely resented inside Iran, the Iranian government actually benefits from having an opposition group like this,” she said. James Phillips of the Heritage Foundation agreed. “When they sided with Iraq against Iran in the [1980-88] war, that was the kiss of death for their political future. Even Iranians who might have sympathized with them were enraged that they became the junior partner of their longstanding rival,” he said.

“Some of their representatives are very articulate,” Phillips continued, “but they are a terrorist group. They have a longstanding alliance with Saddam Hussein, and they have gone after some of the Kurds at the behest of Saddam Hussein.”

Ros-Lehtinen dismissed U.S. intelligence reports of the group’s involvement in Hussein campaigns against Kurds and Shiites as “hogwash” and “part of the Khatami propaganda machine.”

Washington representatives for the MEK’s political arm, the National Council of Resistance of Iran, disputed news reports that the MEK is aligned with Saddam Hussein. “The relationship has been independent, whether politically, militarily, financially or ideologically,” said Alireza Jafarzadeh. “We have never interfered in the internal affairs of Iraq.”

Emphasis mine. Note Michael Ledeen being on the record against these folks.

And Alireza Jafarzadeh asks permission from the head of the cult (Rajavi) to carry out self immolation and suicide operations anywhere in the world. His letter has been published proudly by the Mojahedin official newspaper.

Mojahedin Khalq Organisation is currently on the list of terrorist organizations in US, UK, European union, Canada and many other countries. The head of the cult has been on the run after the fall of his benefactor Saddam Hussein and his wife Maryam Rajavi is currently under investigation (house arrest) on terrorism related charges in France. 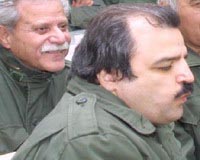 Jafarzadeh was such a committed member that he repeatedly volunteered for suicide operations. In the MKO publication No. 127, he is quoted as saying that he is ready to burn himself in front of the UN’s New York office whenever it is needed for the MKO’s cause.

In 1988, together with 15 other MKO members in the US, Jafarzadeh left for Iraq to participate in the Eternal Light military operation. He served in Hossein Abrishamchi’s military unit in Iraq and undertook terrorist training in an Iraqi camp called Zaboli Camp. After the MKO’s disastrous defeat in this operation, he was sent back to the US.

In a press conference on 24 March 1991, Jafarzadeh explained the details of one particular MKO operation in Iraqi Kurdistan (Operation Morvarid). This was soon exposed, by Human Rights Watch among others, as the deliberate massacre of Kurdish civilians by the MKO on the direct orders of Saddam Hussein.

Some months later, MKO radio announced Jafarzadeh had been made a Deputy Executive member of the MKO. His name along with his paramilitary rank was also published in MKO newspapers.

In 1992, with the help of Saddam Hussein’s Intelligence Service, Jafarzadeh traveled to Pakistan to negotiate and establish new relations between the MKO and one of the war lords of Baluchestan (on the Afghanistan-Pakistan border). The relation was established in order to facilitate sending terrorist teams into Iran for paramilitary terrorist operations. Jafarzadeh was the broker for this deal and in person paid some of the tribal chiefs on behalf of Iraqi Intelligence.

From 1998 Jafarzadeh has been introduced as a member of the NCRI (MKO) Foreign Affairs Committee. In 1992 he took part in interviews (including an interview with Voice of America Radio) as the NCRI representative.

Jafarzadeh also attended a meeting in Washington in 2001. The meeting was organized by the MKO to protest inclusion of their name in the US administration’s list of terrorist organizations. Jafarzadeh was the MKO’s speaker at this meeting to explain their position.

Fox News now introduces Jafarzadeh as either their employee or as the head of a consultancy company. But as recently as 2002 the same man was interviewed by Fox News as the MKO’s representative in the US Congress.

There are serious allegations that Jafarzadeh has been involved in illegal deals in the USA, including deals involving chemicals which can be used to produce WMDs. There are also allegations that the MKO, with him as its representative, have been involved in serious money laundering and drug trafficking in the USA. These allegations, as well as his and Fox News’ dodgy connections in Washington, are currently under investigation.