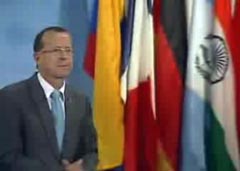 Martin Kobler, the Special Representative of the UN Secretary General to Iraq, which was handed over in person during a meeting.

With regards, we wish to share with you what we learned from some members of the MKO who very recently managed to escape from the camp and gain their freedom.

As you know, Camp Liberty has the area of one kilometer by one kilometer which is much smaller than Ashraf Garrison. The entrance contains check posts belonging to UNAMI and to the Government of Iraq separately. This place is now called ‘the triangle’ since the MKO has also established a post there.

All traffic in and out of the camp is controlled by the two posts of UNAMI and the GOI, and the third one, which belongs to the MKO, is merely keeping watch on these events and their job is to inform the various MKO units when the UN authorities are entering the camp. In this case residents in the unit that the officials are approaching are obliged to return to their dormitories and lock the doors and do not come out until they are told everything is clear. “Security reasons” is the excuse they give to the members for such a bizarre act.

When the UN officials enter the camp, the MKO post immediately warns leaders and they issue a state of alert to all units. In this situation, those residents who might try to contact the UN officials must be watched carefully and kept away. Everyone has been warned not to approach any visitor.

According to the information we have received, each unit of the Rajavi cult inside Camp Liberty has a legal and political liaison ‘representative’ who is the only person authorized to have contact with UN officials when they enter the camp. They are instructed to continuously complain about conditions in the camp. Everyone else must stay inside the dormitories until they are told to come out when the officials have left.

The MKO authorities say that they have been promised the same facilities they had in Ashraf and now they understand that this is because the UN wanted to separate off the discontented members. The MKO is following a policy of causing disruption in their present situation in an attempt to be allowed to return to Ashraf.

In this regard they have ordered the members to deliberately create terrible and unbearable conditions inside the camp and, according to them; if some die doing this it is worthwhile.

The Sahar Family Foundation which represents the ex-members and the families of trapped members of the MKO would like to urge you to deal with the above mentioned matters and make every effort so that:

1. The inhabitants of the camp have free access to the outside world, particularly to the UN officials who visit the camp;
2. The suffering families who have been waiting in Iraq for three years will be able to visit their loved ones.