Sahar Family Foundation wrote a letter to the U.N. Secretary-General Ban Ki-moon’s special adviser to help with the relocation of residents of Camp Liberty in Iraq to new countries, Jane Holl Lute, which is below. This letter has also been given to the press and other relevant bodies. 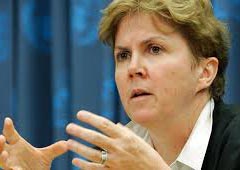 Regarding the new situation in Iraq, the present condition of Camp Liberty where the members of Mujahedin-e Khalq Organization (MKO, Rajavi Cult) are located is quite tense and dangerous; but Massoud Rajavi still insists on keeping his followers there, no matter what the price might be, and have all of them killed.

You are probably aware that the MKO leaders openly support the terrorist organizations looting and massacring the Iraqis, and that they are very pleased with this turn of events. There is also evidence showing that the MKO leaders, as in the time of Saddam Hussein, are acting against the Iraqi people and the consequence for the trapped MKO members in Camp Liberty will be possible revenge attacks.

We know from recent escapees that a large majority of the individuals located in Camp Liberty under the rule of Massoud Rajavi are discontented and dissatisfied with their situation and they try to disobey their commanders. This situation has reached a crisis point so that the MKO leaders are thinking of eliminating some individuals in order to avoid further unrest. We also have information indicating that they are practically living full-time in underground bunkers for security reasons and that conditions in these bunkers are atrocious.

The daily and weekly psychological manipulation sessions of brainwashing and indoctrination of cultic thoughts are carried out even more severely than before, and in the meantime the interviews with the UNHCR have been stopped and the camp leaders have announced that having any contact with the UN or the ICRC is crossing a red line.

It is now about 6 months since you were appointed as the UN Secretary-General’s special adviser to relocate the residents of Camp Liberty to other countries. We are aware that you have always been successful in your previous tasks and no one doubts your capabilities. We wish kindly to ask you to let us know what efforts you have made to transfer these people to a safe place, and what obstacles you have faced during fulfilling your mission and what programs you have for the future.

We, on behalf of the suffering families of the members of MKO in Iraq, urge you to reply to our inquiries and include as clear a picture as you can of what will be the future for these individuals.